Where is your wife?

I contacted my family and a few old friends after Stephanie’s death. That’s what people do, I figured, and I was trying to do what people do.
There were some heartfelt responses, and had some teary phone calls with my family, and with Stephanie’s parents. But there was no real response in Madison. Stephanie and I didn’t have any real friends here. I’ve always struggled making friends, and she was almost as introverted as I am. What few friends we had, we’ve been out of touch with for a long, long time.
To my genuine surprise, though, I received a quick response from an old friend, Joe Gallo. When we’d lived in San Francisco, Joe and his then-wife Shawna lived there too, and they were probably our best friends at that time and place. We’d all drifted apart since then, and Joe and Shawna got divorced, but when I emailed Joe and told him that Stephanie had died, the years disappeared quite quickly. He volunteered to come see me, something I wouldn’t have thought of, but it didn’t take me long to say yes. So, Joe arrived last Monday and spent a week sharing the apartment with me and my memories of Stephanie.
Stephanie would have been delighted to host Joe at our apartment, and in a way she almost did. He stayed in our bedroom, where I had emptied the closet and cleaned out everything, swapped out the dresser and end table for furniture from a different room, moved the bed to a different corner, and put on newly-bought sheets of a different color — effectively changing everything. It didn’t look at all like our bedroom, so when Joe opened the door it wasn’t a violent assault on my memories.
A week with Joe was perhaps an odd interruption of my grief, but I have no experience with grief, no idea what’s odd or what’s not, honestly. I don’t have any idea what “works” in dealing with something like this, to tell the truth.
I’m 60, but death is new to me. My father died twenty-five years ago, but I was estranged from the family and didn’t even hear about his death for a month. And when I did hear about it, I dealt with it by not dealing with it, compartmentalizing it away and actively trying not to think much about it. When my brother Fred died a few years ago, I hadn’t seen him in decades. I’ve had a few old friends die — it starts happening on a regular basis at about my age — but there was always distance and time between me and those deaths.
Stephanie’s death is the first I’ve experienced that was truly close to me, and I haven’t gone half a day without crying. I’m not yet eating normally, and I haven’t had anything even approaching a good night’s sleep, unless you count the sleeping-pill nights.
All I know is that it was very helpful to have Joe around for several days — someone who knew and remembered Stephanie, someone who could give me a hug when I needed it, which was often. Joe and I even talked about things other than my wife, which was strange as hell but also helpful.
* * * * * * * * * * 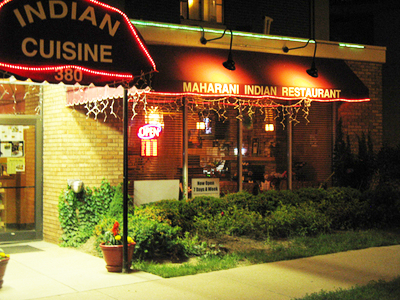 On Tuesday evening, Joe and I had dinner at Maharani. For Stephanie and me, Maharani had been our favorite Indian buffet, and one of our favorite restaurants in Madison, period. They have a fabulous all-you-can eat lunch at a reasonable price, and I can eat a lot, so Stephanie and I went there maybe monthly, beginning when we arrived in Madison in 2004. Their buffet ends after lunch, and dinner prices are substantially higher, so we had never eaten anything but lunch at Maharani.
In my mind, Maharani was on a list of places in Madison that I would have to avoid — places that Stephanie and I had visited too many times, where the memories might be dangerously overpowering for a widower without his wife. Never again, Ogden's Diner. Never again, baseball in Beloit. Never again, Maharani. But when Joe suggested Indian food, well, it just seemed natural. Maharani was the place to go.
At the restaurant, the waiter seated Joe and I at the same table where Stephanie and I had frequently been seated. We’d been seated there so often, I suspect that table is strategically held for fat customers, as there’s a bit of extra space around the periphery. I sat in what had usually been Stephanie’s chair at that table, and Joe sat in what had usually been my chair, so it didn’t feel overwhelmingly weird or wrong, only somewhat weird or wrong, and only at first. By the end of the meal it was just a table in a restaurant.
The dinner was too expensive, but truly delicious, and we didn’t have to worry about the price, because Joe’s ex-wife Shawna had pledged to pick up the tab. She had been a good friend to Stephanie all those years ago, when we'd all lived in San Francisco, and Shawna had offered to mail me a casserole when she’d heard about Stephanie’s death. Paying for dinner was probably a more practical idea, since she still lives on the West Coast. Thank you, Shawna. It meant a lot to me. Also, it’s sweet that Joe and Shawna are on good terms.
After dinner, Joe and I napkinned our faces, and Joe settled the bill. We were on our way out of the restaurant when the nice manager lady made eye contact with me and asked, “Where is your wife?”
I had to explain, “She passed away,” and then I had to explain “passed away,” because English is the manager's second or third language. She shook her head “no,” as if she didn’t approve of the idea or perhaps didn’t understand it. Then she clasped her hands together as if she was holding her own hands, which I took to mean, “You seemed so much in love.” She said, “I’m sorry,” and I didn’t burst into tears, which surprised me then and surprises me now.
The restaurant manager was essentially a stranger. Stephanie and I had stopped coming to Maharani a few years ago. Steph said she’d felt like a spectacle going through the buffet line in her wheelchair, plus she had trouble reaching the food at the back of the buffet from her chair, and she said she felt like a little kid if I offered to help her. So, it had been a long while since we’d been there, and yet the manager remembered us.
That will probably happen again. We’re memorable, Stephanie sometimes told me – a fat guy with a beard pushing a woman in a wheelchair. And we went to the same places all the time, our favorite spots over and over. We never introduced ourselves or anything, but we were not exactly anonymous. That lady knew us, without ever really meeting us.
The main takeaway from this story, though, is that it’s good to have friends, especially when you feel like you’re alone in the world. I have never felt more alone, and yet I’m not. Thank you, Joe. Thank you, Shawna.
Newer Post Older Post Home