Last will and testament 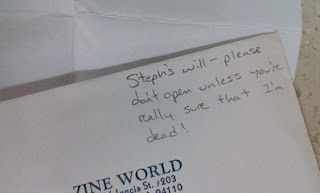 Today, cleaning out the spare room, I came across Stephanie's last will and testament. She had never mentioned it to me, so I'd been under the impression that she died without leaving a will. But I found an envelope — actually, it's a return envelope from Zine World, the zine we made together in the 1990s — and in the corner of the envelope she'd written, "Steph's will — please don't open unless you're really sure that I'm dead!"
I'm really sure, so I opened the envelope. It's a brief, typed page that says,
I, Stephanie Lynn Webb, being of sound mind and blah, blah, blah, declare this to be my last will and testament.
I bequeath all my money and worldly possessions, as well as my eternal love, a love that reaches beyond death, to my dear husband Doug, whose life it has been my great privilege to share. Chin up, darling. Think twice about depriving this harsh world of your sweet and strong spirit just because I'm gone. That being said, I'll be here waiting whenever you're ready to join me.
Suicide. She's talking about me killing myself in grief over her death. Stephanie wrote this nineteen years ago, and we had talked about death and suicide, way back then. It made sense, really. Before we met each other, both of us were quite certain that we'd live our entire lives alone; once we were a couple we were so rhapsodic with each other that when we discussed either of us dying, we'd both end up crying. We agreed that we wanted to go together, preferably both of us flattened by the same runaway bus, just to get it over quickly, with neither of us alone and in mourning. If perchance we didn't die at the same time and place, well, the thought of either of us being left without the other was so horrible, we'd both said that we might consider suicide as a response.
We meant it, absolutely. But we'd mellowed and maybe matured since 1999. We'd had far less abstract and more detailed conversations about death, many times, and we had both backed away from the suicide response as of, I'd say, circa 2005. Wherever Stephanie is, I am going to join her, but it's not my plan to arrive any time soon. I'm not going to kill myself, but since she mentioned it in her will, that needed to be explained.
Back to the will:
In the event that Doug passes away before me, I leave all my estate to my mother, Karen Webb. In the event that she passes away before me, I leave all my estate to my father, Jack Webb, who should not be confused with the guy from Dragnet. The two of you brought a girl into this world and raised her to be a good and happy woman. Thank you for all you have given me. I love both of you very much.
In the event that all three of these people have passed away before me, I would like whatever money and property I have to go to the homeless shelter that is located closest to my permanent residence at the time of my death.
It's signed Stephanie Webb, and it's dated October 30, 1999. She would've been 29 years old when she wrote it, and still in very good health. She always planned ahead.
But it's not a legal will. I've Googled around, and found the relevant statutes in Wisconsin. To be valid under state law, section 853.01, it would need the signatures of two witnesses. There's no signature here except Stephanie's.
Her expressed desires, though, are exactly what I would've predicted, with the exception of the homeless shelter. I would have thought she'd name Planned Parenthood as the contingent beneficiary, since in recent years they've been our primary charitable contribution. Back in 1999, though, when she wrote this, women's control of their own bodies was not in immediate jeopardy like it is now.
Of course I'm crying here, but there's also joy in my tears. I've been going through Stephanie's stuff for more than a month now, boxing things up for Goodwill, getting other things organized, putting some objects and knickknacks on the shelf as a Shrine. There's an entire room full of stuff I haven't even started going through, so I'll be at this for a long, long time. And in the back of my mind I've been wondering if I might find a note from her.
This is the note I'd been hoping for. I've always known that Stephanie loved me, and she always knew that I loved her. We told each other, thousands of times. But I haven't heard her say "I love you" since she was in the hospital, so this last will and testament is a wonderful gift. I'm calling her parents, and I'll read it to them. Then I'll have it framed and mounted on the wall, where I'll read it often and treasure it forever.
Newer Post Older Post Home