The Patels and the pizza

Ecstatic but exhausted, Stephanie and I arrived in San Francisco. Not the lovely San Francisco you see on post cards, but the real city, and a particularly grungy neighborhood, near the corner of 16th and Mission Street, where I'd been living. I liked the location because a BART station was only footsteps away, but the hotel itself was exactly like hundreds of other residential hotels in the city. It was sixteen steps up from the sidewalk, but one step up from homelessness.
The formal term is "single room occupancy," or SRO. They're generally ramshackle old buildings from an earlier era, constructed as working-class housing for single people, but now used exclusively by the poorest people in the city. An SRO or residential hotel might have dozens of residents, and each has a room with a bed and a dresser and a sink, and that's all. There are shared toilets and showers down the hall. 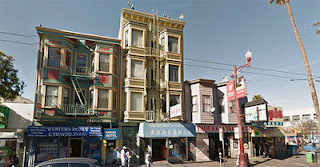