The night we met

Stephanie and I met through zines. Everyone's next question is, "What are zines?"

Zines (rhymes with beans) are amateur magazines, published on photocopy machines and sent through the mail. Instead of thousands of copies, a zinemaker (or 'zinester') prints perhaps twenty, perhaps a hundred copies; then he/she folds and staples and mails them to anyone who expresses an interest. One of the best ways to express an interest is by sending a zinester a couple of dollars. Another way is by sending a zinester the zine you've created. 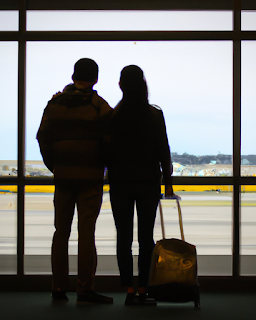 Zines were popular with a tiny niche audience in the 1980s and '90s, before there was much of an internet. Zines are still being published and mailed today, but the audience has gotten smaller, since most folks find the internet easier. On the internet, you don't have to send cash to a stranger and wait a week or two to receive something you might or might not like. But the internet lacks a personal touch, zine enthusiasts will tell you. And I'll tell you, if you haven't read zines you don't know what you're missing.

Stephanie lived in Madison, Wisconsin, and wrote and published a zine called Crawfish, which sparkled with comedy and satire. Perhaps it's best likened to a good episode of Saturday Night Live, only instead of sketches, a new and usually funny article every few pages. Also, no musical guests or unfunny bits. I would sprawl out in bed reading each issue, laughing a lot, and when I'd finished reading I'd usually read it again.

I had written a zine, a day-to-day journal of my late 30s, after I’d given up on ever finding love, working part-time at crap jobs, and living in a ramshackle San Francisco residential hotel, sharing the room with rats and roaches. It was a mildly mean-spirited homage to loneliness and poverty, with an occasional chuckle if the words weren't too clumsy.

By this time, though, I had stopped publishing my zine, and instead I was publishing a bigger zine, primarily focused on reviewing other zines. We hoped it would introduce readers to hundreds of zines they'd never heard of. Stephanie and I had traded notes to each other along with our zines, and I knew she had exactly the sharp wit I was looking for, so I had asked her to review zines for our new zine. In that sense we’d been colleagues or unpaid co-workers for almost two years.

Soon we were trading letters instead of notes, and something about our personalities smoldered and eventually sparked in those marvelous letters. In one letter, she wrote that the only meaning of life is to be kind to others, and then she explained what she meant, at length. In another, she mentioned that she'd earned a college degree and had been well on her way toward a second but she'd dropped out instead.

It takes some serious guts, I wrote back, to reconsider something enormous like that, and walk away when no doubt your friends and parents would be disappointed. She once told me she'd thought flunking out of grad school was a major failing in her life, but that she began falling in love with me when she read that line in one of my letters.

Now that she’s gone, it would be heavenly to re-read those letters and perhaps quote them at length, but somewhere in our travels all those letters were lost. They exist only in my heart.

At the time, I had maybe two or three friends, and to my surprise one of them was this woman I'd never met. So we decided to actually get together, face-to-face in the real world. She booked a flight to California, and I met her at the airport. Her plan was to stay for a week; she ended up staying two weeks and marrying me (spoiler alert!).

I had never seen Stephanie before that moment at the airport, not even a photograph of her. She didn’t want me to see what she looked like, until we were face-to-face. Steph always thought she was fat and never thought she was pretty, and preferred not to have her picture taken. I'll tell you what I told her: She was plump but not really fat (I was always the fat one), and maybe she wasn't a Vogue model, but she was definitely an attractive woman.

So at San Francisco Airport on a June evening in 1997, I didn't know who I was looking for. Didn't know what Stephanie looked like, and she likewise didn't know what to expect when she met me. That’s actually part of the allure of creating zines – you can't see a zinester's face, only a zinester's personality. So people who saw themselves as ugly, or fat, or hideous, could connect with others and be judged solely on the content of their characters.

At the gate, I watched a parade of people stepping off the plane, and looked for one who seemed to be about the age (26) and gender (female) I'd been led to expect. She was the second 20-something woman to come off the plane alone, so she was the second one I said "Steph?" to. The first one looked at me like I was crazy. The second one smiled and said "Doug?" and we took up our conversation where we'd left off in our letters.

Even that quick conversation was remarkable, because conversations or social interactions with almost anyone were difficult for both of us, yet conversations with each other were so very easy, right from the start.

Was it love at first sight? Yeah, it was, but Steph and I had already exchanged dozens of letters, and our letters had some real content – not just a lot of "How's the weather in Wisconsin?" and "How are the earthquakes in California?" In our letters, we went on for pages and pages about things that mattered to us, things we believed.

So certainly, it was love at first sight, but we weren't strangers when we met. To a large extent, we had already fallen in love via the mail. I was ¾-sure before I laid eyes on her that she was the one, and Steph felt the same way.

As we walked down the airport concourse and outside, then onto a Muni bus headed for San Francisco, the words continued flowing easily between us. All our lives, we'd both been the quiet and shy one, but there we were, riding the bus to my scuzzy hotel, and talking with no hesitation at all. Two strangers were talking like best friends, which, it turns out, is what we were from the moment we met.