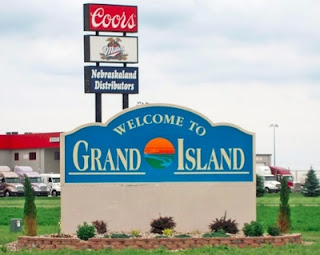 There was probably nothing grand about Grand Island. Looking it up on Google Maps today, guess what? It's not even on an island. It's just another town on the Nebraska prairie, I'm sure. But for us, that first night on the road, Grand Island was exactly what we needed — peaceful, quiet, welcoming, and well-lit. We were jittery and jumpy when we arrived there, but rested and relaxed when we left the next morning. Talking about everything that had happened the day before, Stephanie said, "We made it through yesterday, so I think we can make it through anything." Smart lady. She was right.
Once or twice over the years, we spoke of vacationing in Omaha and Lincoln, but we were of course joking. We also spoke occasionally about returning to Grand Island, for a brief vacation or a longer stay, or even to retire. About that we weren't joking that town is sincerely a happy memory. But we never returned to Nebraska.
The next day, we went motoring into Wyoming and points west, and that's the next story I'll tell. But first, a tangentially-related memory pops into my head, added now as an addendum: My beloved Stephanie never ate a Spam sandwich in her life. Some years later, though, she did consent to try a few bites of scrambled eggs and fried Spam I'd made myself for breakfast one morning. She pronounced it, "Not as awful as I'd expected, but also not good."
Newer Post Older Post Home