A little surprise for Stephanie

I miss Stephanie in 14,361 different ways so far, and the count goes up every day. Toward the top of the things I miss about her is, I miss the little surprises we frequently gave each other. Why wait for birthdays and Christmas, when you can do something unexpected that'll put a smile on both your faces today?
When she saw that my socks had become holier than thou, Stephanie darned them, and a few times she bought me new socks. Long after we'd left San Francisco, I mentioned that one of the best things about living there had been one-buck tickets to Oakland A's games on "Dollar Tuesdays," and a week later an A's baseball cap was plopped onto my head one night after dinner. When I cut myself trying to slice and dice some onions, next thing I knew she'd gifted me an "as seen on TV" veggie-slicer — and it really, really works, and I still use it today.
I often brought Steph cookies or pies from some of the local bakeries, just to see her grin. She said once that she liked my alarm clock, so when hers became unreliable, I gave her one just like mine. She enjoyed Bob's Burgers and especially liked the character of Louise, the girl who's always wearing bunny ears on that TV show, so I surprised Steph with a set of $30 bunny ears, "gift-wrapped" in a 99¢ plastic box; she hated the bunny ears but loved the plastic box, and used it as a footrest.
We gave each other little gifts, often. One day out of three, I'd estimate as an average over the years, one of us was giving the other something unexpected but appreciated. It's been months since I've done something sweet for my sweetheart, but this morning an idea occurred to me.
She wasn't a teenager, wasn't particularly punky, and her disability meant no more mountain-climbing, no more dancing. She couldn't walk or stand up, but she wanted to stand out in a crowd. Dying her hair purple was on her to-do list. "I want to be the only woman at dialysis with purple hair," she announced one evening. "I want to be the punk purple-haired lady in a wheelchair."
For a few years, though, health issues made her hair weak at the roots, leaving not enough tresses on her head, and you could see skull-skin between her strands of hair. She didn't want to dye it purple until she had a healthy head of hair.
When her hair and her health came back, she pondered and postponed the dye-job, undecided whether to do-it-herself for ten or twenty bucks and maybe screw it up, or go to a salon and spend upwards of $100 but be fairly confident they'd get it right. She talked about changing her hairstyle to match the color, but decided to "wear it the same as now, only purple." And she debated with herself over the exact shade of purple she wanted, but eventually she settled on an unplugged purple, non-neon and mild. "I want a color that's not too aggressive, a little shy like me. It should be on my head not in your face — but still undeniably purple."
After many months of thinking about it, though, Stephanie never got around to doing it, and then she passed away. So today I'm giving my wife the hair she wanted. This is how she saw herself, or how she wanted to see herself. This is my wonderful wife, shaded in purple. 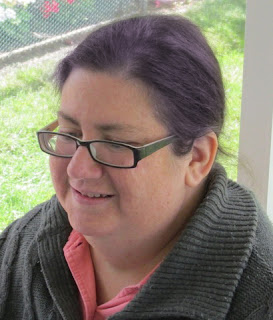 Special thanks to Daexsin at Reddit, the Photoshop whiz who made this happen.