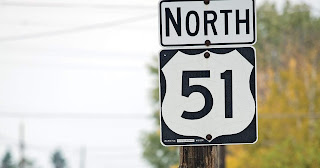 I had lunch with the in-laws today. We met at a restaurant in Beloit, and had a very nice time. Beloit is a sleepy town on the Wisconsin side of the border, about an hour's drive south from Madison; if you go any further south you're in Illinois.

Stephanie and I drove to Beloit many times, because they have a minor league baseball team — the Beloit Snappers — and we enjoyed going to the games.

Madison has a minor league team, too — the Madison Mallards — but we only went twice and hated it both times. People are packed elbow-to-elbow in the grandstands, and the grandstands are made of aluminum, so it gets quite hot on summer days. We also abhorred the endless advertising that's announced over the public address system. Maybe we just lucked into the wrong games at Madison's Warner Park, but we never felt comfortable there, and we never became Mallards fans.

In Beloit, the baseball crowds are smaller, and that's a plus not a minus, for introverts like Stephanie and I. The floor of the stadium is wooden, so on sunny days it doesn't cook you quite so crispy as a metal floor. And even though our favorite seats in Beloit were directly under a speaker, the advertising announcements usually seemed amusing instead of oppressive. We were Snappers fans. Steph had a couple of t-shirts, a cap, and a few bobbleheads.

Steph and I went to twenty or thirty Snappers games over the years, but one afternoon we drove to the ball park but didn't go to the game. It was a beautiful sunny Tuesday, and I'd taken time off work. Pro baseball is usually played at night during the week, with day games only on the weekends, so a game in the sunshine during the week was going to be a special treat. We were hoping for a smaller crowd than usual, since most folks would be at work.

We parked several blocks away, farther than usual from the stadium, and from all the cars we'd already surmised that it was going to be crowded. When we stepped off the sidewalk and approached the stadium, though, we were overwhelmed not by the number of people but by their age. Kids. Teenagers. Everywhere. There seemed to be hundreds of children and teenagers walking, running, and shouting on the walkways outside the stadium, and as we waited in queue at the ticket booth we noticed that there were also hundreds of teenagers walking, running, and shouting inside the stadium.

It was some sort of a promotional event, with half-priced tickets for kids. Kids tickets are usually half-priced, so they must have been even cheaper than that, but whatever the deal, there was apparently no stipulation that kids had to be accompanied by an adult. Everywhere we looked we saw kids in herds — three to twenty kids together, and rarely with an adult watching over them.

"I've got a bad feeling about this," Stephanie said, quoting Han Solo from Star Wars. And I too had a bad feeling. Now it should be said, these weren't particularly awful kids. They weren't rampaging hoards. They weren't fighting, weren't throwing stuff, but they were kids — loud, rambunctious, and everywhere. There were enough kids to fill a couple of mid-sized schools.

A baseball game is a low-key happening, slow and leisurely, and that's part of the appeal. But three hours of baseball, punctuated by what appeared to be thousands of virtually unsupervised children and teenagers — well, that's not our idea of a good time.

"Do you want to bail?" I asked Stephanie.

"I'd have a happier time just about anywhere than at this baseball game. Let's bail."

We walked back to the car, with no idea what we were doing next except that it would be better than what we'd almost done. So what could we do that might be fun?

"Road trip!" Steph hollered. That's a line from Animal House, but it's also something we often squealed in excitement before a long ride in the car. Usually, our road trips were well-planned in advance, but today we were winging it. "Let's drive back to Madison," Steph explained, "but instead of talking the freeway like we always do, let's take the back roads, and stop anywhere that looks like fun."

And so we did. Instead of taking Interstate-39, we drove home via Wisconsin Highway 51. It's a nice ride, beside the Rock River for a ways. We came upon the Circus Drive-In (a hamburger-type drive-in, not a drive-in cinema) on the north side of Beloit, and it looked delightful. It's an old and old-fashioned place with a crazy clown sign, and maybe they'd bring lunch on roller skates to our car. We wanted hamburgers and onion rings, but the restaurant was closed. We weren't sure whether it was just closed for the day or permanently shuttered, but we promised ourselves that we'd swing past the Circus Drive-In again some day.

Today was the day we'd promised, but it was just me, not "we." Driving to and from Beloit to see Stephanie's parents, I decided to take Route 51 instead of the freeway, and the Circus Drive-In is still there, still closed and out of business. Curiously, the sign where today's special might be posted has a single word: "Soon." So maybe the Circus is coming back?

We bought sandwiches and soda at some deli in Janesville, but decided we wanted to picnic at a park instead of eating sandwiches in the car, so we drove on, through Edgerton, past Albion, and in to Stoughton, which is maybe twenty miles from Madison. Close enough that we visited often. There's a gigantic and absolutely marvelous second-hand store we'd wandered through several times, but we couldn't go there any more; there are six or eight steps to reach the front door, and no wheelchair access. Plus their best stuff was always in the basement, but there's no elevator.

Follow Highway 51 a few blocks north from the thrift store, and you come to the Koffee Kup Restaurant. Nope, I don't know why they spell coffee and cup with K's, but we occasionally ate there as a special treat. Stephanie loved their reubens, and I usually had what they call a "garbage omelet," an omelet with everything edible in the kitchen cooked into it. But we'd stopped going to the Koffee Kup; two steps at the front door made a barrier that Steph couldn't get past.

North beyond Stoughton, signs directed us to Lake Kegonsa State Park, where we ate our sandwiches, drank our Cokes, and wandered around for a couple of hours. It was beautiful, another afternoon of Stephanie and I together, and those were beautiful no matter where we were.

As always that day, we spoke easily about everything — "of shoes and ships and sealing-wax, of cabbages and kings, and why the sea is boiling hot, and whether pigs have wings." We never ran out of things to talk about; we only ran out of time for talking. So now there are no more baseball games. No more picnics. No more road trips. No more conversations. But always, there's an endless supply of happy memories.
Newer Post Older Post Home