Breakfast for the blues 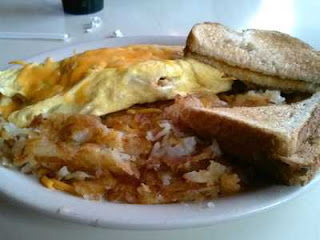 It's coming up on a year since Stephanie ... died. Almost typed "passed away," but that euphemism seems fake to me. We never talked about that particular phrase, but Stephanie was big on direct speaking and common sense; I think she'd say, "Don't soft-pedal something awful. Deal with it." She'd say that she died, she didn't "pass away."

A year ago, she was feeling lousy and not eating well, and I was trying to coax her into seeing a doctor. Sometime soon — I don't know the exact date — it'll be a year since I came home from work and found her on the floor in the bedroom, barely lucid. That's not a pleasant day to remember, so I won't go into detail, but we rode to the hospital in an ambulance. Again. We'd ridden to the hospital in an ambulance twice before. Her health was sometimes precarious, over the last several years of her life.

But she also had long stretches of good health. She'd sometimes go the better part of a year seeing no doctors at all, except the kidney people. No escaping that — once you've been diagnosed with kidney disease, you'll have perpetual appointments with kidney doctors and kidney nurses for as long as you're alive. But other than the required kidney appointments, she sometimes went many months without needing medical attention. She was handling the dialysis well. We had good times, lots of good times. Unless we got smacked by a truck or something, we figured we had a lot of years remaining. A lot of years together.

Well, we figured wrong, and it still feels unreal. Those "lot of years" will never happen. Someone terrific is gone. An all-around excellent person, my favorite human out of all the billions of us, is absent. Someone with so much passion, commitment, knowledge, kindness, so much dang spark, simply over. Someone with so much heart, and it stopped beating. The only woman I've ever loved, and the only woman who's ever loved me. The person who rescued me from a life of nothingness. She was about 75% of the brains between us, and 80% of the human decency. She was the only other person on the planet who really and truly mattered to me. And she's dead.

It still rips me to shreds, that her half of all our memories are missing. That she's left, and she's never coming back. No more holding her hand. No more calling me on my crap. No more laughing with her. No more good home cooking.

I've grown accustomed to life without her, as much as I ever will, but it still bites. I write about our times together, but can't capture a fraction of a fraction of a fraction of what she knew and said and thought and what she was. I ain't tough, so even after 11½ months I cry at the littlest things. Still pull the car over to the side of the road when I'm suddenly too overwhelmed to drive. Still relive little moments of our time together, random flashes of memory beyond my control, but I welcome it.

Maybe I'm depressed? That word doesn't feel right to me. Depression is a real thing, nobody's doubting that, but there ought to be a different word for times when you ought to be depressed. If I wasn't depressed, seems to me, that would be a symptom of mental illness. For lack of a better word, then, let's call it the blues. Extended blues, for a year now.

Stephanie and I had a treatment for the blues — bacon and eggs. Breakfast is my favorite meal, and it was hers, too. Something fried, something eggy, something sweet, something savory, something pig-based, and always a cup of coffee. Breakfast at a diner is how we battled the blues, whenever Steph or I had a crappy day at work, or when some bozo Republican got elected, or whenever she endured another cruel medical event. There's no better way to beat back the blues than ham and eggs and caffeine.

Well, these days I eat breakfast in a diner once or twice weekly. For forty-five minutes, or for an hour if I drink too much coffee, everything in the world isn't quite so sucky. That's worth ten bucks plus a tip. It would be better, of course, so much better if Stephanie was having breakfast with me, if we were trading bites off each other's plates, giggling at each other's jokes. But breakfast at a diner, even without her, is better than moping at home.

This morning I went to the Cottage Café, way out on Atlas Street. Ogden's is yummier, but we ate there dozens of times so Ogden's is overcrowded with memories of Steph, maybe more memories in a tightly concentrated space than I can handle. We only ate once at the Cottage Café, and we really weren't impressed. "It was OK," Steph said, but nothing special.

So this morning I thought the Cottage Café would be a better choice. And anyway, it was the height of the lunch rush the day we'd gone there, and they were swamped. This time I went early, hoping they'd have better food and better service at the crack of dawn, when they wouldn't have many customers.

It's in a rather remote section of town. Had to check a map just now, to be sure that it's actually inside Madison, not in a suburb or some neighboring town. And still, even in that far-flung corner of the city, memories of Stephanie were everywhere. Right down the street from the café, there's the U-Haul place where we rented the truck to move to California, and where we returned another truck when we moved to Madison from Kansas City, and where we rented a truck a third time, to carry a sofa we'd bought from the Salvation Army to our apartment.

A mile or so down a Cottage Grove Road, there's the parking lot where we left that same sofa leaning on a dumpster, several years later, after it had broken in half (since it was in two pieces, we didn't need to rent a truck; we just crammed it into our car). In that same strip mall there's a keto restaurant, where we almost had lunch, but we were both put off by the seating — indoor picnic tables with permanent benches that couldn't be moved, leaving no discernible space for someone to sit in a wheelchair and eat at a table. Further down the street, we once went to a garage sale and bought a giant cooking pot that Steph never really used.

Breakfast was fine. Quite good, actually. Omelet and coffee, $8.95, and a fivespot for the waitress. Drove home afterwards, thinking of Stephanie. There's no corner of this county that doesn't hold our memories, and that's almost always a good thing.

On the left, somewhere, was the Mexican place where we had dinner, just once. We meant to go back but we never did. I see four buildings that might have been it, but they're all something else now. A bit further and on the right, was a library branch — it wasn't the branch we usually went to, but we went there several times and saw a movie there once. It's gone too. Swanky apartments are being built where the library used to be, and that branch of the city library is being rebuild somewhere else nearby; I'm not sure where. Approaching our neighborhood, Olbrich Gardens, then Atwood, then Winnebago, and memories everywhere.

In a few weeks it'll be a year since Stephanie left without saying goodbye. It's still flabbergasting. Absolutely no any idea how I've made it this long, or how I could possibly make it through another year, but I will, because Stephanie would want me to. And once or twice a week, a Denver omelet with potatoes and toast helps … just a little.
Newer Post Older Post Home