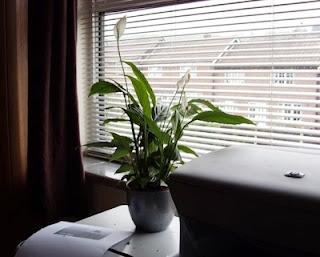 Stephanie worked at office jobs for the whole time we were together, right up until she couldn't work any more.

All these jobs had their frustrations, of course. If it's not frustrating, well, then they wouldn't have to pay people to do the work.

At UCSF, Stephanie said that she found the academic and medical bureaucracy difficult to deal with, and though he was usually quite kind to her, Dr Buster could be a bit of an ass with other people. At Exploratorium, the whole building reeks of coolness (in a good way), the vibe was relaxed, and management seemed low-key and relaxed — but the pay at Exploratorium was dismal, and San Francisco was expensive. Her tiny paychecks were a major factor in driving us out of town, toward Kansas City.

In KC, the real estate business where Steph worked was family-owned, which is supposed to be a good thing — so much better than a cold-hearted corporation, right? Well, not in this case. The nepotism was off the charts. If you were "family" you were management, and they had some staggeringly not-smart family members running several departments. If you weren't family, you could be treated quite shabbily, and Steph felt that she was treated unfairly there, on a regular basis.

In Madison, at the bank where Stephanie worked, the CEO was the son of the former CEO. He was given free reign, and made some abysmally stupid investments with the bank's funds. Steph was generally treated fairly, though, and she was promoted to become the manager of the mortgage department. Then, as the bank's bad investments went sour, Steph was a victim in the third or fourth round of layoffs. That bank was in the news with reports of its perilous financial health for several years after Stephanie left, and finally it was sold, its name was changed, and the CEO who made those foolish investments was golden-parachuted off the premises.

At the state agency where Stephanie then worked, one particular co-worker would chat endlessly about the most uninteresting aspects of her life, and whether anyone listened or didn't, this woman continued talking — to herself — at an ordinary speaking volume, all day, every day. This co-worker also violated departmental rules on a daily basis, but she was on good terms with the department head, so she never got in trouble. Meanwhile, when Stephanie started having health problems, the agency hassled her about it every time she needed time off for a doctor's appointment, and Steph was terminated the moment she'd missed her FMLA limit of work hours.

Through all these jobs, Stephanie worked hard and gave a hoot. She often came home and described her day in detail, telling stories about difficult customers that she'd calmed down, about special projects that she'd handled efficiently and brought in on time, about how she'd gone the extra mile-and-a-half to help a customer or co-worker out of a jam.

"I was good at my job today," is how she began such stories, and I believe that she was good at her jobs, just about every day. The Steph she described in her work stories was the same Steph I knew so well. In whatever sticky situations we encountered together in life, she was smart, strategic, steadfast, and someone you definitely wanted on your team.

Maybe there was one time, though, when Steph wasn't the perfect employee, and instead she went for the jugular. There was a co-worker — let's call him Jonah — who enjoyed making Steph's work-life difficult, perhaps on purpose.

Five months in a row, Jonah called in sick on the day when the monthly report he handled was due, leaving Stephanie to prep that report as quickly as she could. That report wasn't really her responsibility, so the first few months she did it for Jonah, the report wasn't quite right. By the third month, though, she had it down. The fourth month, she had Jonah's report mostly prepped the day before he predictably called in sick. The fifth month, she added a new column to the spreadsheet, providing new info which made the report's real meaning easier to envision.

Stephanie received compliments from upstairs over adding that column, so of course, Jonah had to keep that new column in his future monthly reports. And after that, he stopped calling in sick quite so predictably.

But Jonah started saying mean things to Stephanie as they passed in the hallway — always under his breath, so no-one else in the office knew. He started slowing down on some of the work assigned to him, but only the work that impacted Stephanie's job. Several times Jonah lied to their boss, saying Stephanie hadn't done things she was supposed to do, and claiming that she had made mistakes she hadn't.

Finally, Stephanie complained to the boss herself, and described the ways that Jonah was shirking his duties and making it look like she was shirking hers. The boss was sympathetic but said something Stephanie hadn't known — that despite having a different last name, Jonah was a cousin of the company's owner.

When Stephanie told that story that night, we both thought the battles were over and the bad guy had won. We bought some fancy beer, and Stephanie drowned her sorrows in a couple of bottles, while I drowned mine in a couple of sips. But was it over?


"Was it 'over' when the Germans bombed Pearl Harbor?"
—Bluto Blutarsky, Animal House

No, it wasn't over. Jonah was goofy about a potted plant at his desk. He spent five minutes every morning oohing and ahhing it, watering it, gave it special nutrients twice a week, and talked about it the way parents talk about their children or Steph and I talked about our cat. Hurting that plant was the most effective way to hurt Jonah.

I don't know what chemical she used; I don't have a degree in chemistry, but Steph did. Whatever it was, it was effective. She dripped a few ounces into the soil late on a Friday afternoon, and by Monday the plant seemed sickly, on Tuesday Jonah took it home, and by Wednesday it was dead. Stephanie even brought me in to the office after hours on Monday night, to show me what was left of Jonah's Spathiphyllum — more colloquially and perhaps ironically called a peace lily.

The plant didn't deserve it, of course, but Jonah did. Stephanie said that he was distraught for days, and that was the point. Mission accomplished. Was there a better way to get back at her awful co-worker? Probably, though I don't know what that might have been. Steph didn't like killing Jonah's plant, but she felt something had to be done.

I'll admit, I enjoyed my field trip to Stephanie's office, seeing that plant browned and withered, and hearing how it hurt and humbled that schmuck Jonah. Don't mess with my lady; you can't win.

Steph told me other stories of her workdays that, in my opinion, could have justified similarly beyond-the-bounds responses, but this was the only time she stepped outside of office decorum. It's said that the exception proves the rule, and indeed, this incident was exceptional. In all the other difficult situations she and we faced, at work and in life, Stephanie was always quiet, eloquent, low-key, soft-spoken. She tried to make things better.

Jonah perhaps had suspicion about his plant's sudden demise, but he never voiced it to anyone, and he dialed back his office demeanor after the peace lily died. Steph had that job for another year or longer, and instead of being a complete jerk at work, Jonah became merely surly. So the one time Stephanie gave up on trying to make things better, what happened? She made things better.
Newer Post Older Post Home