Shortly after we moved to Wisconsin in 2004, we started playing bingo at casinos. Stephanie had been to the state's native-run casinos before we'd met, and she never cared for the slot machines or any of the other attractions, but she had always loved some bingo. The nearest casino for us was Ho-Chunk in the Wisconsin Dells, so one winter's night we made the fifty-mile drive and played bingo in the Dells. 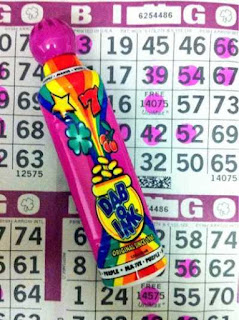 When you play home-style bingo, you mark the numbers as they're called, and you're trying to get five numbers in a line — north, south, or diagonal — on your card. The game is never played that way at the casino. You're still marking the numbers as they're called, but at the casino you're hoping they'll call numbers that form the pattern of the letter "Q" on your card, or the shape of a key, or a block of four squares in each corner, or two or three separate lines of five, or a line of five but it can't be diagonal, or a line of five and it must be diagonal. A different pattern every game.

Changing the pattern every game was hard on my brain. I'm not a smart man. Sometimes I'd forget what pattern we were playing for, and erroneously play for some other pattern. Sometimes I'd get confused, and not even notice that I almost had the winning pattern. And while I'm not certain that it happened, chances are, once in a great while, I had the winning pattern and didn't even notice. Bingo ain't my game.

Bingo was absolutely Stephanie's game, though. She was always happy at bingo. Beyond happy. She'd sometimes chant "Bingo, bingo, bingo" beginning the night before. We'd talk about other things on the drive to bingo, but she'd interrupt the conversation every five or ten minutes with another shout of "Bingo!" She was enthusiastic about bingo, the way a puppy is enthusiastic when you pick up the leash.

She strategized the selection of where we sat, with the goal of avoiding people who looked like they might be chatty during the games — talking during play is against the rules, but that doesn't stop some people. And it's not our normal introversion and chatting with strangers she was worried about; if people are talking too much you can't hear the numbers being called.

We eventually migrated from Ho-Chunk Casino in the Dells to Potawatomi Casino in Milwaukee. It's a different tribe, and a different vibe. The deciding factor was cigarette smoke. A bingo crowd is always about half smokers, and the smokers' tables and non-smokers' tables are all in the same room at Ho-Chunk, so we often got cigarette headaches and came home stinking of tobacco. At Potawatomi, though, there's a full-length glass wall between the smokers' section and the no-smoking section, so we could play without breathing noxious fumes, and we'd come home smelling like ourselves instead of strangers' smokes. Potawatomi was a little more expensive and a few miles further driving, but we felt it was worth it.

Weirdly, I won $100 that first night we played bingo. Hollered "Bingo!" loudly but almost too late, because I barely understood the pattern we were playing for. Over the subsequent years we played bingo many, many times, and never again did I holler "Bingo!", but Stephanie won seven or eight times. Her total winnings might have been $500, over fifteen years of bingo.

Of course, at a casino the odds are always in the house's favor, so we spent more than we won. We generally went on "discount" nights, and still it was $30 or $40 for both of us to play all night. More than that, because Steph liked to buy "hotballs" and extra games that I always skipped. We played bingo at the casinos, I'd guess, fifty times over our fifteen years in Madison. Factor in gas money and meals — packed and bagged in when times were tough, bought on premises when money wasn't quite so tight — and I'd guesstimate that we spent $3,500 playing bingo. We won $600 or so, so our net loss was $2,900.

Oh, and on our first bingo date, that night when I won $100, it started snowing as we left the casino. Twenty miles down the freeway, the snow was coming down so flurriously that we could hardly see the taillights on the car in front of us as we crawled at 10 MPH on the interstate. We decided that getting off the freeway was our only safe option, and we crossed our fingers hoping that the sign at the next exit — blurry and illegible behind the snow — was for a hotel. It was. We checked in, spent a quiet night away from home, and if you factor in breakfast the next morning at the adjacent restaurant, we spent more than what I'd won at bingo. So even when we won at bingo, we didn't really win.

It wasn't about winning, though. It was about fun. Stephanie enjoyed the ever-changing games, and there's something about the numbers, called over the public-address system every few seconds and charted on your six or twelve cards, that really tickled the mathematical corners of her mind. Steph playing bingo was about the happiest Steph I ever saw, at least out in public.

When we were poor, bingo was almost our entire entertainment budget. Let's see — $2,900 divided by fifty casino trips, that's $58 per casino visit. $29 for each of us, for three hours of entertainment. Five hours of entertainment, if you counted the drive time. Look at it in that light and squint a little, and on a per-hour basis it's about the same as the cost of going to a movie. Steph & I loved going to the movies, but we didn't see many movies that Steph enjoyed as much as she enjoyed playing bingo, win or lose.

All this is brought to mind because, dunno why, but I was reliving the drive to Milwaukee, to Potawatomi, to play bingo. It was a long drive, with familiar landmarks, and the casino is visible from the freeway so I never got lost. I remember the exit vividly, the overpass we'd cross, the roundabout, the right turn, the parking garage, and mostly, of course, I remember how every aspect of it made Stephanie. She even enjoyed the long wait in line to buy the game packages.

I'll never go to the casino without her. For me, the best part of bingo by far was the joy on Stephanie's face. Without that, sheesh, it just sounds like five hours of overpriced tedium. With her, though, holy smokes, bingo was fun. Stephanie's sheer delight playing bingo was incalculable. Her huge smile was what I loved about bingo. Well worth the price paid, and more.

I'll never quite understand why, but I think Steph's favorite things in life were me, her family, the cat, and bingo, in that order. Everything else — even things she was bonkers about, like picnics, movies, cooking, reading, cuddling, logic puzzles and video games — was a scramble for fifth place.
Newer Post Older Post Home