As Stephanie encountered health issues, day-to-day life became more difficult. That's the story of the last six or seven years of her life — but that's a terribly sad story, and not the story I'm telling today. No, today it's a happier story, about gadgets that proved helpful with some of Stephanie's problems.

One of her first problems with day-to-day living came when it strangely became difficult and painful for Stephanie to walk. Her legs were mysteriously weakened, and she saw doctors who scratched their heads, unsure about what was causing this and what to do about it.

Meanwhile, though, Stephanie had to deal with walking unsteadily, so we bought her a cane (the first of several). She also struggled with such mundane but suddenly scary tasks as sitting down on the toilet, and getting back up again. Lifting herself off the toilet was so difficult that our short-term solution was for Steph to call my name, and I would come into the bathroom, take her hand, and pull her from sitting to standing. Which worked fine when I was at home; it was quick, easy, and painless — but Steph was stranded if she needed to use the toilet while I was at work or out running errands. 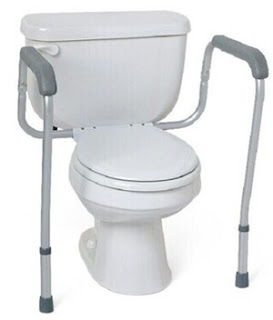 So we bought our first helpful gadget, a set of toilet rails, for $25 or so. They were easy to install, and they were sturdy enough to trust them with Steph's weight. When she was done on the toilet, she could push herself up with the side-rails. It was a great relief that she could lift herself off the toilet, but it was still difficult. 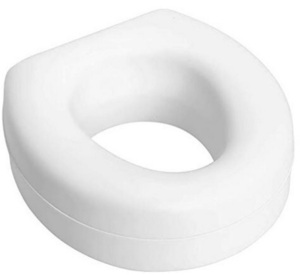 So we bought this riser seat, for $20 or so. It's plastic but sturdy, and it nestles securely inside a standard toilet seat, so the seated position is five inches higher than it was. Five inches made all the difference, and with the rails attached as well, going to the bathroom was no longer a difficulty.

Showers became dangerous when Steph was having trouble standing, so I immediately bought anti-slip pads, and glued them to the shower floor. Still, though, standing in the shower was precarious. She was embarrassed to ask me to be her "spotter" while she showered, but it was necessary, so I stood outside the shower and held her arm, keeping her stable and myself close enough to grab her if she started to wobble. This method was successful but it was a mess, both logistically and in soaking the entire bathroom, so we only did it twice. 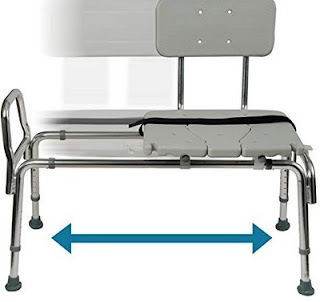 By then I'd ordered a shower chair, like this one. It was expensive — $150 or so — but it was well worth it. Steph could sit outside the shower, then slide the seat and herself into the shower, where she could safely and easily close the curtain and reach for the shower nozzle, and shower all by herself. "Like a human adult," she said happily.

As I've said elsewhere, we lived in an apartment that wasn't wheelchair-accessible, with a few steps separating the front door from the sidewalk. Those steps were difficult when Steph had trouble walking, and we mastered a routine where I went up the stairs first and pulled her up after me, by the arms. 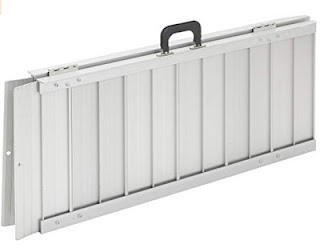 Once Steph was in a wheelchair, though, we needed a ramp, and we bought one similar to this picture. It's solid metal, longer and heavier than it looks, with a nice convenient handle that fell off after a few months, and couldn't be repaired. But the ramp worked well; I would carry it to the stairs, unfold it from briefcase-shaped to a ramp, which could take Steph up or down. Amazon sells ramps like this for about $120, though we bought ours used for a lot less.

One of our smartest gadgets was also the cheapest. Getting up to get a drink of water was a hassle for Steph; she had to either wake me up to get some water for her, or else she had to scoot herself from the bed into the wheelchair, then roll down the hall and into the kitchen for the water, and then roll herself back down the hall and scoot herself off the wheelchair and back into bed. I would never have complained about being awakened to fetch her some water, but Steph didn't like waking me up, so getting a drink of water in the middle of the night meant five minutes of serious effort, and of course she'd be wide awake by the time she'd quenched her thirst. 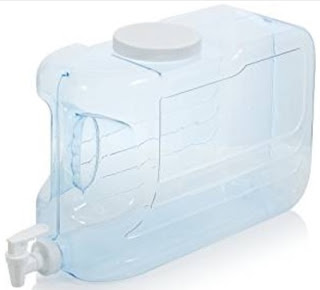 The solution? We bought a water-spigot, similar to what's pictured here. It was easily refillable, and we kept a full one in the fridge, so the water by her bedside was nice and cold every night, for at least a few hours. It was like having an instant sink. Stephanie could roll over, get a glass of water, and go right back to sleep.

When she was bedridden, sometimes for weeks or months at a time, I would make Steph's lunch before going to work — hot soup in a Thermos, cold milk in another Thermos, and she liked to chew ice, so I'd leave her a third Thermos full of ice cubes. For a while, we kept a toaster and a loaf of bread on her nightstand. In the winter, when Wisconsin gets cold, we bought a space heater with a remote control, so Steph could warm up the room as needed, without having to scoot in and out of her wheelchair. I wanted to get her a Clapper, so she could clap-on and clap-off the lights, but she thought Clappers were too kitschy and classless, so alas, we never bought one of those. But her bedside lamp was on an extension cord with a switch, under the blankets.

We always tried to find gadgets that could help, and we were generally successful. If there's a moral to this story, it's only this: If you're going to be disabled, it's preferable to be disabled in a well-off first-world country like America, where gadgets can help for a reasonable price. And it's obvious but it needs to be said, that I wish she was here, to wake me up for a glass of water in the middle of the night.
Newer Post Older Post Home