While Steph was at Baptist-Lutheran Hospital for minor surgery, among the many pricks and pains and tests, she was tested for Methicillin-resistant Staphylococcus aureus (MRSA). Not sure why they tested her — maybe they tested everyone, or everyone who was scheduled for surgery. Her test results came back positive.

We didn't know what MRSA was, and I'll wager you don't know either. It's a stubborn, difficult-to-fight infection that originated from hospitals. Which makes sense, I reckon — put a whole bunch of sick people in the same building, and you're concentrating the sickness, maybe inventing some new sickness. It used to be called "hospital-acquired MRSA," but it's moved beyond hospitals — now you can get MRSA anywhere.

To recap, then: MRSA is not something you want, and you can get it anywhere, but you're especially susceptible in a health-care setting. Bear that in mind when you’re visiting Gramps in the hospital after his gout surgery, or your wife and newborn child in the maternity ward.

Steph never developed any symptoms of MRSA beyond testing positive at Baptist-Lutheran. MRSA was never mentioned as a factor in any of her subsequent illnesses or hospitalizations. We're not sure she ever even had MRSA; the test results could have been a false-positive, which certainly happens. MRSA was not a diagnosis she had to deal with in any normal way, like the flu or diabetes or any other illness you can think of. But just testing positive for MRSA was a little like carrying leprosy.

Once you've tested positive for MRSA, just once, you're always on the MRSA list. Every time Steph was admitted to any hospital for the rest of her life, her room was always and immediately labeled as "MRSA isolation." 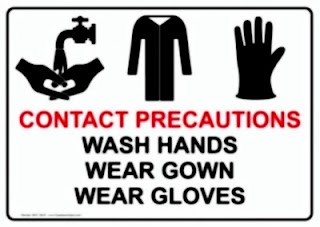 What does that mean? A special sign went onto the door of her hospital room, announcing MRSA isolation procedures. Doctors, nurses, and all other employees were required to "gown up" before entering Stephanie's hospital room, which entails wrapping a lightweight protective gown over their clothes and tying the string in the back; putting a mask over their face, and gloves over their hands. Upon leaving the room, these masks and gloves are tossed into special "isolation trash," and the lightweight gowns go into a special "isolation laundry" bin, to be washed, sanitized, and later re-used.

There were many, many violations of this protocol, however. Gowning up takes time, but hospital staffers are frequently overworked and thus in a hurry. Countless times, doctors, nurses, and others entered Stephanie's room without donning the required protective gear.

And what about me? Sometimes I was required to gown up before entry, gown up after I came back from the mens' room, gown up after I'd gone for a walk down the hall, or to the cafeteria for a sandwich. But just as often the staff considered me and other visitors exempt from the isolation rules. Whether visitors were required to gown up seemed to depend solely on the nurse's mood and persnicketiness.

Ponder for a moment how many times people go in and out of a single hospital room over the course of the day — it's many, many times. One day I kept count, and more than 250 times someone (not including myself) stepped inside Stephanie's "isolated" hospital room.

With that many people coming and going, it's unlikely that the "isolation trash" and "isolation laundry" bins are being emptied often enough. In practice, the bins were often full and overflowing, so used and discarded gowns piled up on the floor. These piles were frequently kicked out of the way by visiting staffers, or by me — but the gowns don't cover anyone's legs below the knee, so every kick effectively violated the isolation, and contaminated someone's britches and shoes.

After Stephanie had been hospitalized several times, after we'd heard the rustle of someone "gowning up" outside her door thousands of times, we came to understand how MRSA isolation negatively impacted her medical care.

Psychologically, it just screams "untouchable" to the patient. Steph sometimes complained that she felt like she was in The Andromeda Strain, a sci-fi movie where patients are kept behind glass and doctors wear rubber suits to protect from contamination.

Every employee's photo-ID badge was clipped to their shirt, which was hidden behind the gown, so when someone gowned up and stepped into the room we couldn't guess whether it was a doctor or a lab technician, unless he/she announced their name and job title. Even if a particular doctor or nurse had seen Stephanie a dozen times already, Steph couldn't recognize that person when he/she stepped into the room, because everyone's face was always behind a mask.

It's MRSA isolation, but the key concept isn't MRSA, it's isolation. Whenever Stephanie was hospitalized — which is to say, whenever she was most frightened, most weak and most worried — her care was provided behind masks, gloves, and gowns that made everyone a stranger, every time. It's difficult to establish rapport, or respect, or any reasonable doctor-patient relationship when the patient can’t even recognize the doctor.

And lastly, riddle me this: Why was Stephanie's MRSA considered so dangerous at the hospital, but not worrisome at all when she had an ordinary doctor's appointment, or when she spent four hours at the dialysis clinic three days a week? Nobody wears a protective MRSA gown at any of those places.

Steph and I believed in science, and medicine is science. We wanted to believe that MRSA isolation made sense, but eventually we concluded that it's simply counterproductive — bad medicine, and bad science.
Newer Post Older Post Home