Let's preface this by saying it'll be difficult to write this in a way that doesn't make Stephanie and I seem bad, mean, uncouth, insensitive, and cold. That said, my mission here is to write about Stephanie and I, and this is one of our stories, so it's gotta be told. 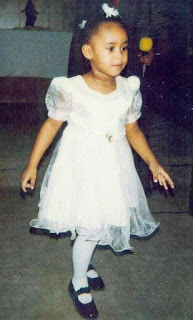 For three years, Stephanie and I lived in Kansas City. We arrived in July of 2001, and as we found an apartment and looked for jobs, coverage of a young child's murder was all over the local news.

This gets gruesome: She was an unidentified black girl, judged to be three or four years old, who'd been beaten to death. Her naked, decapitated body was found near a city park, and her head was found in a trash bin several days later. Yet no-one had reported a missing child matching the girl's description, so the cops and reporters didn't know who she was. Rather than calling her Unidentified Victim, she was dubbed Precious Doe.

For many, many weeks, the murder and mystery of Precious Doe was all over the local newspaper and newscasts, and was the topic of coffee shop chit-chat everywhere we went. To quote the Kansas City Star's ubiquitous questions: "Who was she? Who killed her? Had anyone reported her missing? Did anyone care?"

Then came 9/11/2001, which of course dominated all news on all channels for a long while, but even after 9/11, Precious Doe was frequently in the news. Not that there was much of any "news" about her case; the news was mostly that there were still no leads, or it was coverage about concerned, sympathetic Kansas Citizens who'd left flowers and toys at the place where her body had been found.

After months of relentless coverage of this awful news, it might have been Steph but I think it was me who said, "This poor, dead girl who's been labelled 'Precious' must not have actually been precious to anyone, or someone would've reported her missing. Someone would know who she was."

And let me stress again, it's absolutely horrific what happened to that kid. But after months and months of coverage with nothing new to report, it became tiresome.

"There are lots of families in the KC metro, black and white, who live in poverty, live with domestic violence, same as anywhere else in America, but the newspapers don't call any of these people 'precious' until their head gets chopped off." Not sure whether that was Stephanie talking or me, but we were agreed.

And after that, we came up with a song. No, I don't remember who concocted the lyrics, and yeah, it's a mocking song, but we were mocking the situation, certainly not mocking the victim. I don't know how to do music notation so I can't provide the tune, but these are the lyrics we sang, whenever yet another news item mentioned this poor, dead child:

Of course, it's awful. It's gallows humor, and it's not even funny gallows humor … but we laughed at it. It was our way to ward off the futility of what seemed to be endless coverage detailing every aspect of the crime except who the heck this kid really was, and who killed her, and why.

In 2004, we left Kansas City and moved to Wisconsin, where if Precious Doe made headlines at all, they were much, much smaller headlines and we never saw them. But we still occasionally sang the song, in response to extremely bad news that nobody could do anything about. Three days of coverage of a deadly plane crash? We'd sing the song. Some missing skier's corpse is found frozen solid? We'd sing the song. It became our anthem for responding to senselessness.

Ten years later, Stephanie had to face some senselessness, and her own mortality. She was 42 years old, living a fairly ordinary life but she loved it, and she loved me. We thought we might have a lot of good years remaining together, and then … blam, out of the blue, an emergency hospitalization and a diagnosis of kidney failure.

Stephanie was discharged from the hospital a few days later, and as I drove us home and we talked in the car, I was impressed with how well she was handling the worst news she'd ever heard. We both knew she had a shorter life ahead of her than we'd expected even a few weeks earlier, and yet, she remained generally sanguine.

As we waited at a stop light, she said, "Everything about this situation sucks and sooner or later it's going to kill me. Sure hope it's later."

"I hope so too, Steph. Lots and lots later."

"So we'll follow doctor's orders, I'll take whatever medicines they tell me to take, I'll go on dialysis, and I'll have a lot less of a life than I've had — both in quality and in quantity — but we'll make it work.  We  will  make  it  work."

"And you know what else?" she said, and then she said nothing for a block or so, until she took a deep breath and sang the song, our ode to senselessness:

I joined in for the last two lines, and we laughed and laughed the rest of the way home. We sang that song again, not often but occasionally, when the odds against us seemed insurmountable. It's bonkers, sure, but that stupid song about that terrible murder of that unidentified headless girl helped us to face plenty of senselessness during the last years of Stephanie's life.

Until today, I didn't know that the mystery of Precious Doe had been solved in 2005. Here's what I've learned, from some internet searches while writing today's entry:

The little girl called Precious Doe was actually Erica Michelle Marie Green. She was born in 1997, in an Oklahoma prison where her mother was serving time for prostitution. Apparently, state officials made little or no effort to keep tabs on the baby, and she was halfheartedly cared for by a cousin of her imprisoned mother's husband. When the child's mother was released from prison, she and her lowlife husband took custody of Erica, and everyone in the family seems to have known that she was being beaten by her stepfather on a regular basis, but nobody called the cops or said anything to anyone. One night, under the influence of alcohol and PCP, Erica's stepfather bludgeoned her to death with an ashtray, and a few days later he used hedge clippers to cut off her head, thinking that would make the murder impossible to solve.

Erica Michelle Marie Green was unwanted and unloved in life, and "precious" only to strangers and only after she was dead. It's an utterly ghastly story, and the closest it comes to a happy ending is that Erica's stepfather, Harrell Johnson, was convicted of first-degree murder and imprisoned for life.
Newer Post Older Post Home