Our next entry was supposed to be about the amputation of Stephanie's leg, and all the complications that came after the surgery, but that's such a depressing memory. There's a pandemic bearing down on the world, and the Trump administration's response has been equal parts denial and incompetence, so I'm going to postpone that episode and write instead about something a little less blues-inducing.

When Stephanie and I first saw something by the side of the highway near Sumpter, Wisconsin, Steph said, "What the heck is that?" We slowed, slid over to the shoulder of the highway, and decided to turn around and see what we might be able to see. 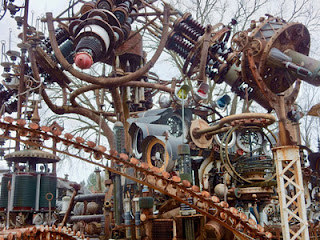 Dr Evermor's real name was Tom Every, and Steph and I never met him but we absolutely appreciated his work. As a young man he ran a salvage operation — a junk shop — and he was always fascinated with junk, so in middle-age he reinvented himself as an artist, building amazing stuff out of old auto parts, and wreckage from anything he could acquire.

He invented a complex backstory for his  alter-ego of "Dr Evermor," claiming he was a British time-traveler from the Victorian era. His most famous (but still, barely famous) work is an enormous twisting sculpture called the Forevertron, which Dr Evermor claimed was really a machine powered by electromagnetic energy, and designed to carry him into the afterlife.

Here, I'll let the doctor explain it in his own words: "You start out with an idea of perpetuating yourself back into the heavens on a magnetic lightning-force beam inside a glass ball inside a copper ring, and zam — what are you doing? You gotta be nuts to do that!" 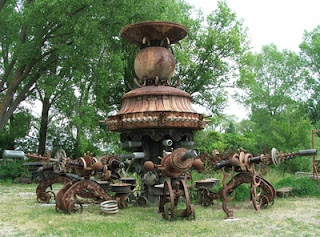 That's Dr Evermor, and yeah, he was … eccentric, but according to this article he wasn't nuts, he was just pretending to be nuts. Which certainly seems sane to me.

Strolling the grounds and admiring his work was a little like visiting an outdoor museum or Disneyland, but also absolutely not at all like either of those places. There's no admission price, no concession stand. There are no rules against touching the displays, and I'm not sure there are ever any crowds — in our three visits to the installation, we only saw perhaps half a dozen other people, and we never saw any staff of any kind. You just park on the dirt lot, and walk through acres of art. 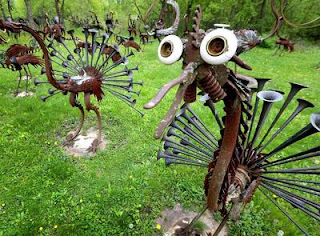 The first time Stephanie and I went, we spent only an hour. Wanted to spent longer but we had someplace we needed to be. Holding hands and slack-jawed, we spent that hour giggling and pointing, but respectfully, because it was obvious that the artist wanted people to giggle and point. "Somebody welded all this art with heavy-duty passion," Stephanie said.

When we returned for a second visit the next summer, Dr Evermor's art was our only destination. We packed a lunch and ate it on an artwork that resembled a big metal picnic table, and of course, we cleaned up after ourselves. It's art even if you're eating on it, and if you don't treat the art with respect you're a cretin. We spent the entire afternoon exploring and appreciating the works, but we still had to rush toward the end because the sun was setting.

Our third trip came after Steph was in her wheelchair. I suggested that we make it a drive-through visit, because the "walkways" between the art works are actually dirt roads, with tire ruts and grass growing in the middle. Clearly, some people do drive through Dr Evermor's outdoor art, and I'm certain the artist wouldn't have objected; he spent his later years in a wheelchair, too.

Stephanie, though, nixed the idea. "Driving through the art installation would be gauche, and anyway, I want to get closer to the art than we could get from the car." So I pulled the wheelchair from the trunk, and I walked and Steph rolled through Dr Evermor's Sculpture Park for what we didn't know would be the last time.

"Fasten your seat belt," I said, "it's going to be a bumpy ride." That's a joke; wheelchairs don't actually have seat belts, but Steph did have a bumpy ride and that's no joke. As expected, our afternoon there was marvelous, again.

Really, though, Stephanie was marvelous. She was always easy to be around, but when she was happy Steph was at her most Stephanie, the maximum of everything that made her the best person I ever knew. There's nothing I liked more in life than making Steph happy. When she was smiling, or laughing, when she was enjoying herself and her life, she was Niagara Falls, the Galapagos Islands, Yellowstone Park, and the Cliffs of Moher, all at once. Sounds corny maybe, but Steph was just the most wondrous sight to behold when she was absolutely happy, and she was absolutely happy all three times we visited Doc Evermor's place.

That's the first image that came to mind today, when I read that Dr Evermor had died — Stephanie smiling, first, and then all the amazing artwork, after that. Creating all of it must've taken an enormous amount of Dr Evermor's sweat and whimsy and bloodied knuckles, but what I liked best about that sprawling meadow crammed with kooky art is that it put a sparkling smile on Stephanie's face. It lit the halogen bulbs behind her eyes. 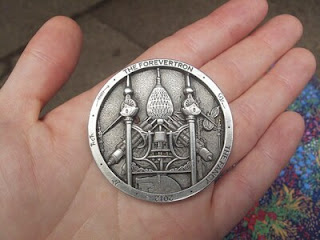 My kudos to Dr Evermor, and I hope his machine now takes him wherever he wanted to go. Meanwhile, I visited his website, and purchased this medallion for the Shrine, inscribed with "a positive spiritual message that Doc would like to share:"

Can't decide whether to write Steph would've loved that or Steph is going to love that. Past present and future tenses are often out of whack because to me, she's still here, sort of. Let's just say the medallion is perfect.

They're planning a celebration of Dr Evermor's life and work, later this year. It won't be soon, though, because like most everything else in America, Dr Evermor's Sculpture Park is closed until further notice, due to the COVID-19 epidemic. When it's open again, I'm hoping to spend an afternoon walking through the artworks, and Steph will be with me. It won't even be a bumpy ride, cuz she'll be walking.
Newer Post Older Post Home