She walked to the front desk


Despite several different regimens of antibiotics, the infection in Stephanie's left foot hadn't gone away. Walking had become so painful for her that we'd purchased a wheelchair, so she could get around inside our apartment, and get out once in a while. We'd been told that the infection had spread to the bone, and that eventually it would spread and kill her, unless she had an amputation. 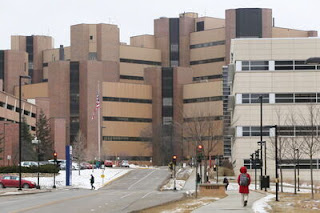 Her admission was scheduled for January 3, 2016, at the University of Wisconsin Hospital, in Madison. Stephanie was terrified, but perfectly calm.

I parked the car, and popped the trunk. Then I came around and opened the passenger door, walked back and brought the wheelchair from the trunk, placed it beside the passenger seat, and locked the wheels. I extended my arm toward Stephanie, she took my hand firmly, and I gently pulled her out of the car and into a painful standing position, very briefly, then pivoted slightly, and lowered her into the wheelchair.

Several times, at Steph's many medical appointments, the staff thought that getting her from the wheelchair onto an examining table would be a problem. They proposed bringing in an additional employee or special equipment to lift her, but Steph would say, "Nah, we've got this," and they'd watch as we did the gentle-pull.

On that bleak morning in the hospital's parking ramp, after gently-pulling Steph from the car to the wheelchair, I pushed and she rolled into the building. We went down a long entry hallway she couldn't possibly have walked, and around a corner into the check-in area. UW Hospital is huge, and even with several staffers at the front desk there was a short line. We waited for a few minutes, Steph in her wheelchair with me standing behind her.

We had talked about this beforehand so I wasn't surprised, but I was absolutely impressed. We were there to have her leg chopped off, so never again would Stephanie be able to walk on her own two legs, and she wanted to walk to the front desk.

"Next, please." A light came on, indicating which reception station we were supposed to go to, and I rolled Stephanie until she was about a yard from the desk. Then I set the brakes, came around to the front of the wheelchair, and gently-pulled her up. She held my arm for stability as she took the few slow but very painful steps to the check-in station, and sat in one of the hospital's chairs — a chair with four legs, not a wheelchair.

Stephanie answered the forty questions you're asked at any hospital's front desk, and the man who checked us in noticed that Stephanie's eyes were wet, and offered her a tissue. She was crying not from fear or worry, just from the pain of those last few steps she would ever take. I was moist-eyed, too, and Stephanie shared her tissue.

When the questions and answers were over, a plastic ID-band was snapped onto Stephanie's wrist. I brought the wheelchair directly beside the chair Stephanie was sitting in, locked the brakes, and gently-pulled her up from the chair, pivoted slightly, and lowered her into the wheelchair, same as we'd done a thousand times.

The staffer recited the always-complicated directions of which way to go, where to turn, which colored line to follow on the floor, and which elevators to take in that enormous, bafflingly-laid out hospital.

It was the beginning of an adventure neither of us wanted, but we were both  enormously proud of those last few steps Stephanie took.

She was assigned a pre-op room, and a couple of staffers lowered the bed and watched as I gentle-pulled Steph from her wheelchair into the bed. Then came a long wait. Then more questions. Then another long wait. Steph had been forbidden to eat, so in addition to being worried and impatient, she was hungry and a little cranky.

After what seemed like hours of waiting, Stephanie picked up the remote control and we watched judge shows on the wall-mounted TV. Steph always liked the judge shows, and there was one local channel that played only judge shows all day, five days a week.

When half a dozen cases had been adjudicated, and the scheduled time for Stephanie surgery had already passed, someone came in and apologized, telling us that the day's schedule was running late. Which, obviously, we already knew, but it was nice to be told.

Then came more judge shows, then more judge shows, with someone else occasionally popping in to make sure we were doing OK. Finally the judge shows ended, and the insufferable sit-coms began. We'd been waiting perhaps four or five hours past Stephanie's scheduled surgery time.

"These things happen," she said. "There was probably an emergency and I'm not going to complain or anything, but if today was going to be nothing but watching judge shows, I could've done that at home."

"In a more comfortable bed," I said, "and with a bigger-screen TV and fewer interruptions."

"It's already after 5:00," she said. "The doctors and nurses and the anesthesiologist probably want to go home. I'll bet my surgery gets delayed until tomorrow. We wasted a whole day waiting for something awful, that won't even happen today."

"Nah, it'll happen today," said me. "If they delay the awful thing until tomorrow, they'd have to delay all of tomorrow's surgeries."

"If they don't chop my leg off today, you have to take me to Cafe La Bellitalia when I'm out of the hospital." That's her favorite Italian restaurant — it's expensive so we only went on special occasions, but the food was usually good and they did delivery, which had been a godsend while Stephanie was homebound.

"OK, you get Cafe La Bellitalia if your surgery isn't today. But what do I get if they do the surgery today?"

"Name it," she said. "It doesn't matter, because I'm absolutely certain it won't be today."

I thought about it for a while. It had to be something that would annoy her, something she very much didn't want to do.

"You have to watch an episode of Doctor Who with me."

It was a long-running joke. I love Doctor Who, but Stephanie thought it looked worse than stupid. I was always (and still am always) on a slow cycle through re-watching reruns of old episodes, and Steph was always teasing me about it and refusing to watch. But now I had her — if the surgery was today.

About ten minutes later the anesthesiologist came into the room, to ask Steph whether she had any allergies. "Wait," she said, "they're still doing the surgery tonight?"

After the anesthesiologist had left the room, Steph turned to me and said, "So, Doctor Who — just when I thought today couldn't get any crappier."

A few minutes later they rolled Stephanie down the hall, still in her bed, which had wheels. I wasn't allowed to come with her.

She was gone for what seemed like hours, but might have been less than I'm remembering. It was Stephanie's third surgery since we'd been together, but by far her biggest surgery. "Worry worry worry," as Steph and I said in our only-us baby-talk.

After lots of pacing and worrying, the surgeon sought me out in the waiting room to tell me everything had gone well. Stephanie was in a recovery room, so I couldn't see her yet, but she'd been '"a trooper," she said. She also told me that the last thing Stephanie had said as she faded under the anesthesia was, "Where's my husband?"

When the staff let me see Stephanie an hour or so later, someone else told me that "Where's my husband?" had been the first thing she said when she woke up. At the time I thought that was the sweetest thing, but now more pessimistically I wonder if that's what they say to all the worried husbands.

We talked, she dozed, and she awoke and we talked some more. I held Stephanie's hand, and slept in a chair beside her bed all night, every night while she was hospitalized. She always wanted me there, and I always wanted to be there.

The doctors had told us that after the amputation she'd need up to two weeks of recuperation time at the hospital. Instead it was five months and four admissions to three hospitals, and an extended stay at a nursing home, before Stephanie finally came home.