We'll be leaving together.

This is difficult. This is the most difficult thing since she died.

I'm healthy but old, and as the end inevitably approaches, I belong with my family. I've decided to move to Seattle, the city where I grew up, where my Mom and most of my family still live. 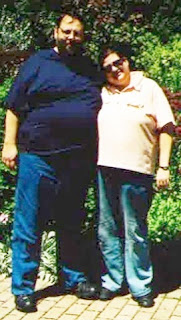 Stephanie & I loved it here in Madison, Wisconsin. It's a smallish big city, with all the advantages of a metropolis, but still with a home-town vibe. It's cozy.

Stephanie went to college here, and missed it while we lived in San Francisco and Kansas City, so we moved to Madison in 2004. It's my favorite of the places we lived. The thought of leaving rips me up inside, every time I realize it's forever.

Down every street in this city, there are memories of Stephanie, and that's wonderful. Sometimes I take a different route to the grocery store or to the diner, just to see what Steph-memories might await me, and there's always something. In the car, on the sidewalk, or here sitting in my recliner, it often feels like she's beside me, which is the best thing left in this rotten world. I will very much miss the random memories of her, popping out at me from all around town.

Stephanie was always full of common sense, though, and I think she'd agree with the idea of leaving. In a sense, it was her idea.

There I was in the kitchen, making a peanut butter sandwich, and Steph was lightly on my mind. She often is.

I was remembering our walks in Olbrich Gardens, the local botanical park we visited several times every summer, always following the same path in the same direction past all the shrubs and blooming flowers, across the same footbridge, to the same bench. We always stopped at that bench for a break, toward the end of our route. While she was walking we both sat at that bench, and after she was done walking she'd insist that I must be tired of pushing her wheelchair, so I'd sit on the bench, and she'd park her chair beside me. Walking or rolling, it was always a few minutes in the shade, holding hands, talking about whatever, and always it was beautiful.

That's what I was remembering as I spread Skippy on wheat bread — just the joy of being with her on the bench at Olbrich. Then I took a bite of my sandwich, and out of the nowhere, Steph brought something up that we'd never talked about.

Of course, ghosts don't exist and I don't believe, and neither did she, so I don't mean this literally, but — it was almost her voice that suggested it...

"You were at my side when I died, Doug. Thank you for that. Maybe you ought to be at your mother's side when her time comes, and your brothers' and sisters'. And maybe you'll want them at your side, when you're getting ready to come join me."

Until she sorta-said that, the thought of moving hadn't occurred to me at all. Not even for a moment. Let me tell ya, hearing it was a jolt. I ate the sandwich and went on with my ordinary routine, but what she'd almost-said stayed with me.

Life will be less in Seattle, because memories of Steph won't be waiting for me at the library, at the drug store, at Burger King, and everywhere else. She will still be with me, though. Always. Stephanie never came to Seattle, but her ashes will.