Tidying up, just in case 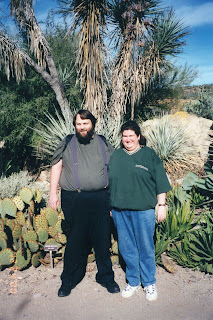 It's been four years since Stephanie died. I don't write about her much any more, because most of it's already been said, several times.

I've recovered as much as I'm going to recover, which is about half. That's fitting. I'm about half the man I was when she was with me.

She spent her last seven years in a wheelchair. Damn it, she got a raw deal from God or fate or whatever. 48 years old when she died — that's way, way too short a life.

We tried to live lots in our limited time, though. She always wanted an adventure, every weekend, even (or especially) after she was in the wheelchair. We went places, did things, had a blast for 21 years and some months together.

We still see each other often, in my dreams, and we even have new adventures. A month or so ago we went to the Grand Canyon, and she's promised me a trip to Washington DC.

Does that sound insane? Do I care? Yes and no.

Sometimes when she's back she's in a wheelchair, sometimes she's walking, and she's only been 'away', not dead. Where she's been she never says, but we're both glad she's back.

Sometimes she brings luggage, and as she unpacks she tells me she's not going away any more. Which is exactly what I want to hear. And she laughs that wonderful laugh of hers, she holds my hand, and she's here. We talk and talk for what seems like hours, though the morning after I can never remember much of what we've talked about.

That's the ordinary dream, and sure it's crazy but I love it, and hope the dreams never stop. It always feels so right seeing her, and there's not much in this rotten world that feels right.

Thank you, love, for coming back to me when you can. There's still no better part of my life than seeing you.

I moved to Seattle a few months ago, but she knows how to find my new place. She's been here many times, in many dreams.

This apartment is a cluttered mess, though. There's old boxes and dirty clothes on the floor, empty bottles and yesterday's plates. I've always been a slob, and kept our apartment tidier than my standards (but still messy) mostly for her. Without her, I've become a complete slob again.

And then I remembered, sometimes when Stephanie's here she's in her wheelchair, so she'll need a path through the rubble. I gotta get this place tidied up in a hurry.

In the dream I then cleaned the room, took out the trash, vacuumed... and then she was here, in the wheelchair, and laughing, smiling, talking, and holding my hand. It was a dream come true, but only in the dream.

I woke up in a marvelous mood, as always after a dream of her, because Stephanie's back from… wherever. And then, over a few seconds, reality washed over me, and slowly I understood that she isn't back, and isn't coming back.

It breaks my heart every time, but — she will be coming back, in my dreams, tomorrow or the night after that. She comes back, at least once or twice every week. Always it's worth the hurt in the morning, for the joy of seeing her again.

When I got up, I cleaned this place some, just in case.