Christmas twinkles on the ceiling

She was still looking for a job, and still worried about that. She'd seemed blue for several nights in a row, and a playful weekend – we went to Golden Gate Park for a picnic, and rented three screwball comedies from the video store – didn't raise her spirits. 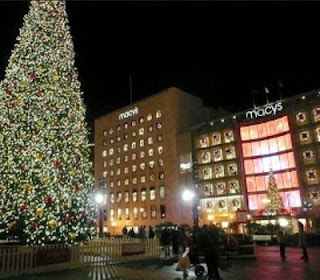 My bright idea was to take her to Union Square. That's a block-sized park across the street from Macy's, the giant department store downtown. Macy's wants you to shop in their store, especially as Christmas approaches, so they put up a ginormous and fully-decorated Christmas tree. When I suggested we see the Christmas tree downtown, Stephanie didn't seem particularly interested, but when we arrived at the Square it was just after dusk, and the tree — six or so stories tall, with thousands of colorful electric lights — was impressive. She squeezed my hand tight and cried a little, but they were happy tears. She said the huge tree gave her goose bumps and left her flush with Christmas spirit.
"Has something been troubling you, Steph?"
She shrugged, and looked at the tree.
"Yeah," she said, "Let's talk about it." She took a deep breath. "The tree is beautiful. Thank you for thinking to bring me here and see it. We need to talk about Christmas."
"I'm all ears."
"If you don't want to do a great big Christmas, I'm cool with that. We probably can't afford a great big Christmas anyway. But I'm not OK with 'nothing'. I need more than just going to a movie and blowing off the holiday."
We hadn't mentioned Christmas since our conversation in the truck outside of Salt Lake City, a couple of weeks earlier. In my head, I quickly replayed that dialogue, and Stephanie's odd silence afterwards.
"Oh, crap, Steph. When we talked about Christmas, I was only saying what I've done in the past. I wasn't saying that's what our Christmas had to be."
"You said you do 'nothing' for Christmas."
"'Nothing' is what I've done for Christmas for years, but you're a special occasion. What I want for Christmas, is for you to have a nice Christmas. Tell me what you want to do for Christmas, and that's what we'll do." I drove a hard bargain. She squeezed my hand again, and her eyes were still wet with tears.
"First, we're trading presents. Nothing big, and we're poor so we should probably have a spending limit. Say, $25."
"That sounds good," I said. "It might even be fun."
"And I need some twinkly Christmas lights."
"Do you want a tree to hang the lights on?"
"No, no tree. There's no place for a tree in our little tiny room at the rez hotel. Just some twinkly lights, strung up in the window."
"So far, so good. Anything else you need?"
"Stockings. I'll need one of your socks, preferably clean, on Christmas Eve. Santa usually has all sorts of cool stuff in his pockets, and he likes to pour his trinkets and candies into your socks."
"If they're hung by the chimney."
"With care."
"But Steph, we don't have a chimney. How will Santa get in?"
"I'm a big believer in disbelief," she said with a smile. "Whenever you're asked to accept something on faith, that's when you should ask the most questions, and the hardest questions."
"OK, I have questions." I took a deep breath to start with the questions, but she raised an index finger to shush me.
"But not with Santa. He's just for fun, so no questions are allowed about Santa."
"And these are the ground rules for a Stephanie Christmas?"
"Yes, these are the rules. I need a little bit of Christmas. Not a lot, but – exactly this much."
She looked happier than I'd seen her in days, so I wasn't inclined to argue. "Deal."
We sat on the bench and admired the tree for a long while. Then we went to a Walgreens, and bought a single string of lightweight, colorful Christmas lights. In our window at the Wallaby, though, the lights seemed lost in the electricity of the city, so instead we tacked them to the ceiling.
"After I've taken off my glasses," Steph said, "I'm lying here in bed and all I can see is the twinkles on the ceiling, out of focus and ethereal. It's a little bit beautiful!" And indeed, it was a lovely effect. We didn't do it every Christmas, but a string of lights on the ceiling became a recurring motif.
Stephanie's brief blue period was over, and she resumed her ordinary mix of charming and cynical, funny and philosophical. When Christmas came, we traded little gifts, and Santa left trinkets in both of our stockings. We said, "Merry Christmas" and "I love you," and we kissed without needing any mistletoe. I took her to a Jackie Chan double feature, where we bought popcorn and snuck in Milk Duds. It was Stephanie's first Christmas away from her family, and we made it a merry albeit low-budget Christmas.
We celebrated Christmas every year, and every year it was wonderful. Steph wasn't jolly old St Nicholas by any means — she didn't do full-fledged Christmas like some folks do, but she wasn't on strike from the Christmas spirit, like I had been. She liked Christmas, that's all. And she reminded me to like it, too. The much-talked-about but seldom seen "true meaning of Christmas"? It was Stephanie. My favorite Christmas with Stephanie? Every Christmas with Stephanie.
Newer Post Older Post Home