Knock on our door

Stephanie and I liked Doctor Who, the British sci-fi show about a goofy space-alien who has a time machine, and zips up and down history getting into scrapes. We watched the show together, and I miss my wife tremendously, so this was probably inevitable. 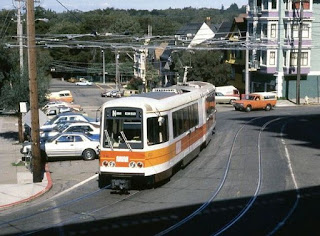 In my dream, I was re-watching an episode from the mid-1990s, when Doctor Who visited San Francisco (yeah, I'll admit it — I dreamed of watching Doctor Who). There was a brief glimpse of a streetcar in the background, and at that moment the episode transcended my dream. I woke with a jolt, and as sometimes happens, I was awake but confused about what's reality and what’s a dream.
Stephanie and I lived then and there, of course, in mid-1990s San Francisco. Factually, Steph moved to the city in 1997, a year or two after that episode of Doctor Who had been filmed — but I was barely awake so facts wobbled like Jello. It somehow seemed perfectly plausible that I could board that streetcar, and it would take me to our apartment on Duboce Avenue, way back when. Stephanie would be inside our apartment, and if I went up the stairs and knocked she'd open the door and we could talk and she'd be alive and everything would be marvelous.
Except, wait a minute. I'll be obviously twenty-two years older than she'd expect, greyer and skinnier, so she might freak out when she sees me. And if she's in the apartment I'd probably be there, too — mid-1990s me — so I'll have to explain to both of them that I'd come back in time. Which means, I'd probably have to tell Stephanie that she's dead, which would be an unspeakably sad thing to say, especially to say it to her.
And still, I wanted to ride that streetcar and climb those stairs and knock on our door. Maybe it would be romantic, or maybe it would be chaotic or comedic, or maybe Steph wouldn't believe me and she'd call the cops, or maybe 1990s-me would get flustered and punch me  — there were all sorts of ways that knocking on that door could go wrong, but none of it mattered. I wanted to see Stephanie. "Wanted" isn't the right word; I was ecstatic that I'd be seeing Stephanie.
It was too late, though. The fog in my head was lifting, and it's 2019 not 1997, and I'm in Wisconsin not California, and Stephanie is dead and won't answer any knock at any door. It had taken perhaps a minute and a half for me to shake the dream and know again where and when I am, and to remember that time travel is a fiction. A minute and a half to go from the frenzied anticipation of "Oh my god, I'm moments from seeing Stephanie again" to this dull, sad reality where we've spoken for the last time, a long time ago.
The cat leapt into my lap, knowing somehow as she sometimes does when a ball of fluff and claws might be helpful, and the next twenty minutes were spent typing this and petting the pet. The time-travel dream was ridiculous, of course, and shifting from euphoria to grief in a minute and a half has left me freshly devastated and very wide awake.
The alarm clock rings in five hours, but I'm probably not getting back to sleep, and I'll be a mess at work tomorrow. And still, what I wouldn't give to ride that streetcar to Duboce Avenue.
Newer Post Older Post Home