Maybe she's waving at me 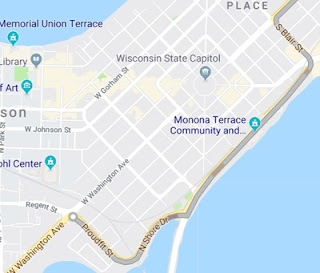 After breakfast alone at a diner this morning, I took the Stephanie drive home. Instead of going through downtown, you take a right turn onto Proudfit Street, which becomes North Shore, then you turn left onto John Nolen Drive, and go under Monona Terrace. When you come out into the sunshine, you're halfway home and you've bypassed all the downtown traffic.

It's a longer drive, but during the week that route can save five or ten minutes, maybe more if downtown traffic is jammed. Of course, it's Sunday morning, so there was no downtown traffic to speak of. I only went that way because it was Stephanie's short-cut. "I invented it," she once jokingly said.

I often think about her when I'm driving the car, and especially when I'm waiting at a stop light. After Stephanie stopped driving, circa 2014, she was always in the passenger seat, anywhere we went. For safety's sake I kept my eyes on the road, but we'd usually be chatting, and at a stop light I'd turn my head and we'd make eye contact. This is silly, but in my head I'm still sort of talking with Steph as I drive, and sometimes I turn to look at her when we're at a stop light. I know she's not there, but still ...

Steph is on my mind almost any time I'm almost anywhere we ever went together. I can always picture when she and I were on any corner together, and the times we ate at that restaurant, and the afternoons we walked in that park, and the evenings we held hands on any particular stretch of sidewalk, and even exactly the spot of asphalt where we parked whenever we shopped at the Co-Op.

I think about Stephanie when I'm coming or going or just wandering around in our neighborhood. We lived in San Francisco and Kansas City before coming to Madison, but if you asked Steph, this town was home. I'm tremendously glad that we came back to this city, her home, and made it our home.

She's on every sidewalk within miles of our apartment, or at least the memory of her. Sometimes I imagine that she's standing there, even now. I can't see her, but maybe she's waving at me from the sidewalk as I drive by. Sounds like a ghost, but it's a sweet feeling, not spooky.

She always wanted to live in a cozy neighborhood, and this was the neighborhood she envisioned, even before we found it. Our apartment is on the city's east side, but Steph would brag that we lived in the "midwestiest" corner of Madison.

To me, she's everywhere we were ever together, so obviously I'm thinking of Steph almost any time I'm at home. Sitting in this chair and reading a book, even if I'm completely engrossed in the book, on some level I remember the many, many times Steph and I were both sitting in chairs in this room, reading books together. Sometimes I wonder what she'd be reading tonight. Jane Austin, probably.

I think about Stephanie when I'm in the bathroom, because we sat on the same piece of porcelain for years and years. Her toothbrush is still by the sink. Her girly stuff is still in the drawers. Her knickknacks are still on the shelf, over the toilet.

I think about her when I'm petting the cat, because Steph was a self-described "crazy cat lady" when it came to our beloved Minky. And when I'm cleaning up the cat's latest hairballs, I remember Steph saying that we'd never get the damage deposit back — too many cat stains on the carpet.

She is always in the hallway, a long stretch of carpet outside our apartment but inside the building, leading past eight other apartments from the building's front door to its back door, with the mailboxes in the middle. Up and down that hallway, slowly, painfully, Steph spent hours and hours and hours over months and months and months, practicing walking on her prosthetic leg that didn't fit. She earned blisters, sores, and blood trying to walk on that thing, and every step hurt, every time. And still, she'd be back in that hallway the next day, trying to walk just a little bit further.

I think about Stephanie when I'm making dinner, because I know she'd needle me. Whatever I'm about to eat, yeah, OK, it's much worse than whatever she might have made for us.

I think about her when I'm washing the dishes. That was always my chore, by choice. Dishwashing is weirdly soothing for me. Pick up a dish, scrub it with a soapy sponge, rinse it, put it on the rack, and pick up the next dish — Ohhhm. And I remember that Steph almost always said, "Thank you for doing the dishes."

Was I as reliable about saying, "Thank you for making dinner"? Probably not, but I'll say it now. Thank you, Steph, for making me thousands of dinners, all better than the frozen cauliflower and frozen veggies and frozen hunk of meat I'm heating and eating.
Newer Post Older Post Home