We'd lived in San Francisco for several years, and we were happy with almost everything about it — the semi-frenzied pace, the liberal consensus, the city's crowded but cool character, its beat and hippie history and haze, and the seemingly endless array of interesting neighborhoods, colorful people, quirky bookstores, and the easy ability, via Muni and BART, to get almost anywhere quickly, in the city or in the suburbs.

Stephanie and I had one major problem in San Francisco. The prices kept going up, up, and away, much faster than any hypothetical increases in income. The first of every month, when the rent was due, became a date to be dreaded. We were never even a day late with the rent, but paying it meant there were fewer and fewer things we could do for fun. And our idea of entertainment wasn't particularly highbrow or expensive; we liked books and movies, picnics and ball games, and little things like groceries and bus rides. It's frustrating to live in one of the world's great cities, when we couldn't afford to enjoy it. We were being evicted by the price tag.

And Stephanie had a second major problem in Frisco. She missed the Midwest ambiance — a difficult-to-define combination of common sense, kind strangers, and plain speaking, all of which she felt was commonplace in her native Wisconsin, but lacking in California. And she missed the weather.

The first time she confessed that she was homesick for the Midwest, was after we'd gone to see a movie at the Embarcadero Cinema. The movie's title and plot are long since forgotten, but it took place in the Midwest, and there was snow. Stephanie cried during the movie, but we both often cried at the movies, so I simply squeezed her hand. After the movie was over, though, she subtly cried in the lobby, and that was unusual. In public, Steph was almost always calm and composed and in control.

I steered us through the crowd toward one of the velvet-padded benches in the lobby, and we sat down. "That movie hit you harder than it hit me," I said.

"The movie was OK," she said. "I'm only crying because …" She hesitated, which was odd, because Steph always spoke her mind, and rarely hesitated. "Because some of the scenes were in the snow." Another long pause, before she explained, "and I miss the snow."

It just about never snows in San Francisco. We saw a few snowflakes falling once while we lived there, but none of the snow stuck to the ground. That's why Stephanie was crying. She'd been raised in the Midwest, so for all her life "winter" meant "snow," and she missed the snow, the seasons.

A brief break for science: In San Francisco and other coastal cities, the temperatures and weather are moderated by the nearness and hugeness of the ocean. That almost unfathomably enormous body of water on the city's edge prevents the mercury from climbing as high or plunging as low as it does a thousand (or even a hundred) miles inland.

Without an ocean and with other dynamic differences to the weather patterns, summers in the Midwest are much hotter than in Frisco, and winters much, much colder. Wisconsin — where Stephanie was from, where she died, and where I still live — digs out from under more than three feet of snow every winter (not all at once, thankfully). Winter in San Francisco means wearing a windbreaker. Winter in the Midwest means shoveling your way out of a parking space in the morning, or standing on plowed piles of snow-frozen-solid while waiting for a city bus.

And Stephanie was right about the other intangibles of the Midwest — the vibe, the feeling, the ambiance. After living in Madison for 15 years, I'm beginning to understand the Midwest that Steph had missed in San Francisco. Back then, though, my understanding of the Midwest mystique was nil. I'd never lived anywhere that wasn't within an hour of an ocean. "You want to move to the Midwest?," I probably said. "OK, sure." I was neither excited nor disappointed at the prospect. I would've moved to Vermont or Alaska or Brooklyn, wherever Stephanie wanted to live, so long as we could be together. 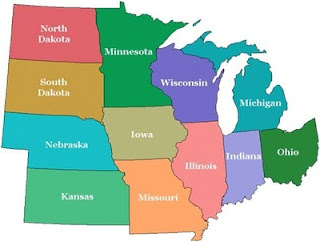 The American Midwest is a sprawling concept, generally defined as everything from Michigan and Ohio on the east, to North Dakota to Nebraska on the west. It's a dozen states, and much of it is farmland and tiny towns, but we wanted to live someplace urban.

To determine our destination, we made a spreadsheet, not on a computer but on old-fashioned paper. We listed all the major cities of the region, researched them, and charted their pluses and minuses. We had eight candidates: Cleveland, Columbus, Detroit, Indianapolis, Kansas City, Minneapolis-St Paul, Omaha, and St Louis.

There were four cities we didn't consider at all: Cincinnati is literally across a bridge from Kentucky, and we knew we didn't want to live in the South. Chicago, we thought, is just too darned big, and too likely to prove unaffordable, same as San Francisco. And Steph eliminated Milwaukee and Madison, because Wisconsin was home for her. "I'm homesick," she said, "but I'm also loving the adventure of living in a new and unfamiliar place, making our way in a city I don't know at all. I still want that adventure, just in a Midwestern city."

We Googled a thousand things, and spent evenings and weekends at the library researching Midwestern cities. We considered each city's unemployment rates over recent years, the presence of major or minor league baseball, the number and niceness of each city's parks, and a long list of other factors. We looked at maps of public transportation systems, and to get a feel for the electoral landscape we read about the political positions of each city's mayor. Over weeks of conversation we eliminated cities one by one, before finally making one of the biggest mistakes of our lives.

"I guess that settles it," I said.