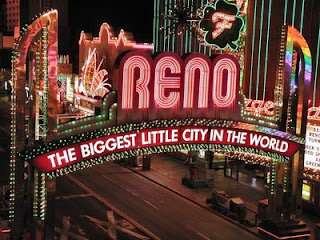 Stephanie and I never quite had a honeymoon. The closest we came was a weekend in Reno, after we'd been together for a year and a half.

We took the train from San Francisco. I've always been nuts about trains, which is mostly the reason Steph bought us Amtrak tickets for this trip. The train was frustrating, though, and hours late both coming and going. Every time a freight train needed to get past, our Amtrak train was idled, waiting on some of the world's ugliest side tracks, mostly in what seemed to be graffiti-painted and trash-covered industrial wastelands, while a fright train rumbled past at about three miles an hour.

When our train finally began moving, a park ranger coughed into the public-address system, introduced himself, and started an hour-long spiel about the train, the history, and the route. "Out the window on my left, you'll see blah-blah-blah." Possibly this was interesting if you were interested, but Stephanie and I really weren't. We wanted to talk, and to quietly enjoy the view, but that wasn't an option. Our train ride would be narrated, with no "off" button.

Steph had somehow snagged us a discounted room at an expensive hotel, and even the lobby was astounding. Never seen so many light bulbs blazing. And our room was beyond astounding — it was Stephanie's revenge for that night when I'd only told her we were going to a movie, without mentioning that the movie was at the fabulous Paramount Theater in Oakland.

Steph had only told me we had a room at the hotel, but the room was the honeymoon suite. It was huge, swanky, old-fashioned but brand new, and just generally ridiculous. From our tenth-floor windows, we could see everything in the glittery city below. Our toilet was gold (the color, not the metal), our bed was enormous and round, and there was a hot tub in our room. It was undoubtedly the fancy-scmanciest place we ever stayed, and then it got even fancy-schmancier.

Stephanie called her parents, long-distance. "Hey, Mom and Dad — I'm calling from Reno. Guess what?" And she told them that we had eloped, which wasn't true. We were never legally married, but Steph was worried that her parents might think less of her for "living in sin," so she made up our marriage. She was twenty-eight years old and worried what her parents might think, but I'm not judging her for it. Quite the contrary, I thought it was downright adorable that she cared so much about her parents' opinion.

As for being man and wife, well, I've already written somewhere on this site that we had pronounced ourselves married, and that settled the matter. Stephanie and I never saw the need for a priest or any paperwork to make it official. For us, it was always official.

We did a little gambling while we were in Reno, of course. That's the whole point of Nevada, isn't it? We played nickel-slots, and some keno, and a single hand of poker, and maybe a few other amusements. Did we come out ahead? Of course not. Everyone wins once in a while, because that's what keeps you interested, but big-picture it's almost impossible to come out ahead. Plus we didn't know what we were doing, so whatever we gambled, we absolutely lost. But it was fun. Then Stephanie played more keno while I took a nap in our room.

When Steph had called her parents and told them that we'd eloped, she wasn't expecting anything but "Congratulations," but they insisted on buying us dinner — from the hotel's room service. Steph had used a coupon to wangle a reduced rate for the room, but our meal from room service was not at a discount. It was maybe the most expensive meal we'd ever eaten. Stephanie felt guilty about her parents buying us a high-priced dinner on false pretenses, but she couldn't turn it down without admitting the truth, so … she ordered shrimp, I had steak and potatoes, and we had cheesecake for dessert.

Checking out of the hotel the next morning, though, Steph felt queasy, and on the train ride home she vomited up all the shrimp she'd eaten the night before. "Never should've ordered the seafood," she muttered between trips to the train's toilet. And then the park ranger introduced himself over the train's public-address system, and blathered again for an hour about the view out the window. Steph excused herself for a few more visits to the restroom, and when she finally started feeling better, it was just in time to enjoy a view of some deserted train-yard where our Amtrak idled, as again a freight train rolled past at the slowest possible speed.

Despite the puking and the annoying train ride, though, we'd had a delightful trip to Reno. "Don't order the seafood" became a running joke, and "playing keno" was our new euphemism for wasting time.

The next time we spoke on the phone with Stephanie's parents, we of course thanked them for dinner from room service, and told them how great it was. Steph mentioned that she'd gotten sick, but I don't think she told them that the expensive meal they'd bought for us was what she'd barfed up.

For me, the trickiest part of Stephanie's elopement ruse was that her parents would sometimes say, "Your third (or fifth, or fifteenth) anniversary is coming up, are you two doing anything special?" And I couldn't even remember what date or even what month was supposed to be our anniversary, because it wasn't our anniversary. It was just that weekend we once spent in Reno.
Newer Post Older Post Home