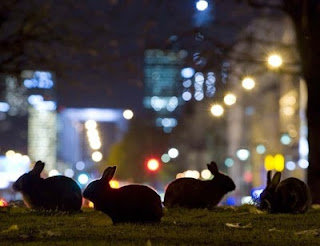 When Stephanie and I moved to Kansas City, though, and later to Madison, there were always rabbits hippity-hopping on the sidewalks and lawns. Whenever we went for a walk in our neighborhood, which was often, we saw rabbits.

In addition to the rabbits in Kansas City, where this story takes place, we also saw lots and lots of junebugs on our walks. You might be wondering, what's a junebug? Not sure either Stephanie or I had ever heard the term before living in Kansas City, but if we had we might have pictured a junebug as a cute, colorful crawling critter. Please, put such images away. A junebug is not at all cute or even colorful.

We never saw junebugs in our apartment proper, but there were hundreds of junebugs living in the basement, horrid and huge creepy-crawling insects that you had to step around or over or squish, to do your laundry. Would you like to have hundreds of giant cockroaches living in your laundry room? Or crawling across the sidewalk any evening you went for a stroll? Well, we weren't wild about it either.

And really, "junebugs"? What advertising executive invented that word? People in Kansas City called them junebugs, but you could call them "lovely" and it woudn't change them into anything but giant cockroaches. So we called 'em cockroaches, and used the word "junebug" only as a joke.

When we went on walks, Stephanie and I almost always stayed in our mostly residential neighborhood — lots of single-family homes, with a few small and old apartment buildings like ours on every block. Also in our neighborhood, there were two museums and the Kansas City Art Institute, and a lot of students from the Art Institute lived in the neighborhood, so it wasn't unusual to see interesting amateur art installations in the yards and parkways along our stroll.

A couple of times, our walks took an extra half an hour, because we became entranced by the students' art projects on public display. I remember an exquisite hand-made small-scale township in someone's front lawn, reminiscent of a model train set where a replica of streets and buildings had been built around the replica train station, only this was just the town without the trains. And on a different walk, we found and explored an intricate labyrinth of bamboo shoots, painted purple and lit with lawn lights. Those were especially wondrous evenings.

In retrospect, I'd say the artworks, and the easy proximity of two museums, made our neighborhood seem welcoming and homey, maybe even "cool" (an adjective I wouldn't often use to describe Kansas City). Kemper Museum of Modern Art, the smaller of the two museums within easy walking distance, had free admission, so we went there perhaps once a month. Always left five or ten bucks in the donation box, always spent an hour or so strolling the building, and always felt like we'd gotten a good deal and a little dose of culture. Thanks, Kemper!

The other museum was the Nelson-Atkins, which is the city's biggest and most famous museum, and for our purposes, it was too big. I just Googled the place, and their website now brags that "Admission is free every day," but that wasn't the case when we lived a few blocks away. Back then, admission cost money and we thought the price was too steep, so we only went a couple of times. Our low-brow review would be that it's a fine, professional, major-league museum, but tickets were too expensive and the Nelson-Atkins is so big we could only see about half of it before we were too weary from walking to continue.

OK, sorry about that. I started telling about the rabbits, and got sidetracked by the cockroaches, and then by the arts in the neighborhood. It's difficult to control the memories, as they wander wherever they wander, but let's get back to the rabbits.

We saw rabbits every time we took a walk, and there must've been thousands of them in the neighborhood. Steph always squealed, "Oooh, bunnies!", when she saw them. She had a weakness for cute, furry animals, which she sometimes said included me.

It was dusk, after a lovely Missouri summer's day, and we were on another of our many walks through the neighborhood, when we saw several free-range bunnies in a small grassy area. It wasn't a park or a yard, just a narrow strip of green between street and sidewalk, leading down to a drain pipe. The rabbits were chewing grass, and Steph and I spoke softly or not at all as we watched from across the street.

Bang! We jumped at the sound, and another Bang! sounded before we knew what was happening. "Sorry to startle you folks," said a stranger, a rifle dangling from her hand. "Just rustlin' up some supper." The hunter had two kids with her, and each of the kids picked up one of the dead rabbits.

"Uh, that's OK," Steph may have said. Steph was always more polite than me, but we were unsure about the proper protocol. Ideally, you'd warn strangers if you're about to fire a gun on 44th Street, right?

Then again, when you're hunting you need to keep as quiet as possible, so as not to frighten the prey. At least, that's the lesson learned from watching Porky Pig cartoons — I've never gone hunting, so I don't know anything first-hand. Pretty sure Steph had never been hunting either.

And hunters are supposed to wear orange or brightly-colored vests for safety, aren't they? This lady was wearing a Kansas City Chiefs jacket, red and white, and her children were wearing just their jammies and tennis shoes. Is that safe urban hunting attire?

Such were the things Stephanie and I talked about that evening, on our walk home and then on the sofa. What are the ethics of hunting wild animals? Is eating meat morally right or wrong, or is it one of those ambiguous things where "it depends"? Do or should animals have rights? Would rabbit stew taste good?

Of course, Steph and I ate plenty of meat — lots of dead animals, fried and baked and fricasseed — but we'd never eaten bunnies. When shopping for beef or turkey, or ordering pulled pork in a restaurant, we didn't give any thought to the backstory of that meat. We agreed that animals shouldn't be kept in cages all their lives just to be killed for meat, but then again, Steph's uncle was a chicken farmer and that never bothered either of us.

The morality of meat was, we agreed, a complicated question, made more difficult by the inarguable fact that, cooked properly, meat is delicious. We decided that we had no issues with anyone hunting, killing, cooking, and eating animals that have had something like a normal life. Those rabbits were fair game, literally.

But those two gunshots had scared the bejeebers out of us, so we did have a problem with hunting rabbits in a residential neighborhood. We Googled the law, and found that it's illegal to discharge a firearm within Kansas City limits. That makes sense, we agreed — we didn't want to live in the Wild West — but we didn't call the cops or anything. Short of murder and mayhem or breaking and entering, we weren't the kind of people who dial 9-1-1.

Fresh bunny blood had spoiled an otherwise lovely walk that evening. The gunshots had illegally killed a couple of rabbits, put dinner on the table for some stranger's family, and propelled a weird evening's conversation about the ethics of eating meat. It was something Steph and I never had talked about before, and never talked about again. There are, we decided, bigger moral dilemmas than what's for dinner.
Newer Post Older Post Home