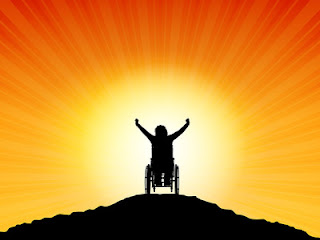 We were having a quiet evening at home, talking about other things, when the conversation lapsed for a moment and Stephanie changed the subject. "Are you ever embarrassed by me?"

"I'm embarrassed by me, sometimes," she said. "By being in this wheelchair. When we go into a restaurant, or a library, or a movie theater, I feel like everyone's eyes are on me. Everyone's thinking, why is that woman in a wheelchair?"

"I did, yeah. And now I'm on the other side, being looked at instead of discreetly looking at some stranger in a wheelchair."

"I thought things I was too polite to say out loud. I … judged people. If I had seen someone my age, someone in their 40s, in a wheelchair, I would've wondered what dumb thing they did to end up like that. To end up like me. That's why, when I roll in someplace, I know what people are thinking as they look at me."

"A little bit of wondering about strangers is human nature," I said. "People-watching, it's called. We both do it. Everybody does it. And yeah, maybe some people are wondering why you're in a wheelchair. Let 'em wonder. Let 'em judge. You can't stop them."

She looked at me and un-enthusiastically nodded her head 'yes', meaning, as I took it, that maybe I was right but it still stunk.

So I said, "You know what I see, whenever you roll into a room? I see someone who's gotten a raw deal from life, but isn't letting that slow her down. Someone who needs to work twice as hard to do just about anything, so that's what you do — you work twice as hard and you do what you want. And you ask me if I'm embarrassed by that? Steph, I am so dang proud of that, proud of you."

"Sweet? It isn't sweetness, Sweetie, I'm telling it the way it is. I've always been proud to be out in public with you; you're a far better woman than I ever deserved. But now that you're in a wheelchair, dealing with dialysis three times a week, and still 100% you and kicking butt every day — I'm even prouder. I can't tell you how proud I am. Lots of proud, that's for sure."

And then I shut up, because I noticed that Steph was quietly crying. "I am as proud of you," she said, "as you are of me."

"Then you're pretty dang proud," I said.

"Pretty dang proud indeed," she said. And we hugged, and I don't think she ever wondered again whether I was embarrassed to be seen with her. A few times, though, she did confess that she was still a little embarrassed sometimes, when we went out in public.

"When I'm pushed into a crowded restaurant in this wheelchair, when strangers scoot their chairs a few inches closer to their tables so I can roll by, when the waitress picks up a chair and carries it away so I can roll my wheelchair up to the table, me and my wheelchair are the center of attention. All eyes are on me. I know it, and I notice it. Nobody says anything, but everyone's watching out of the corner of their eyes.

"After a moment or two, the other people in the restaurant will turn back to their meals and their companions, and me and my wheelchair are just part of the crowd. That moment of embarrassment is quickly over, but it's usually there. I just have to roll with it, so I do."
Newer Post Older Post Home