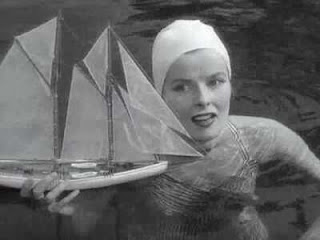 Katherine Hepburn looks at a hand-held model of a boat that she'd once owned with her ex-husband, Cary Grant, and she says wistfully, "My, she was yar."

It's a line from The Philadelphia Story, an old-style screwball comedy that Steph and I watched together half a dozen times. In the movie, someone asks Hepburn, "Yar? What does that mean?"


"It means … oh, what does it mean?" She thinks about it. "It means she was easy to handle, quick to the helm, fast, bright, everything a boat should be." She's talking about a sailboat, but in the movie's subtext she's also talking about true love.

It's a silly movie, with a cliched plot that draws to an outdated resolution which always annoyed Steph & I, but undeniably, The Philadelphia Story is fun. The movie, and that line, popped into my head today, as I was remembering Stephanie, as I often do. She was remarkable in so many ways.

Smart is the first word that comes to mind when anyone asks me to describe her, and I wish more people asked, more often. Steph was educated, sure — she went to three universities, earned two degrees and all that, so she knew stuff. But a lot of people go to college and earn degrees, and Stephanie was smarter than those people, smarter than that kind of smart, by which I mean … oh, what do I mean?

She was abstract-smart — is that a thing? When an unpredictable predicament came along, Stephanie was able to look at it, and innately but almost immediately understand what was needed. No hemming and hawing; just give her enough time to think it through and she'd have a sound decision; the right decision.

For example, the first big problem Stephanie faced after we met was that we were quickly and absolutely in love, but we lived a thousand miles apart. What were we going to do about that?

Together we decided that she'd move to San Francisco, but before the decision, I remember seeing the gears turning behind Stephanie's eyes as she connected all the interlocking pieces of the puzzle. It was a quick decision, yet very thoroughly she'd thought it through. And that's the kind of smart I mean, by the word "smart."

A few more words, in no particular order, to briefly describe my marvelous Stephanie:

Good. There's a treacly cliché you sometimes hear on the political left, often (albeit incorrectly) attributed to Gandhi: "Be the change you want to see in the world." And that's what Steph was. She wanted the world to be a better place, and that mission began, she thought, by treating people fair and square, helping our neighbors, and metaphorically, metaphysically, flushing our own toilet instead of dumping our crap onto other people's lawns.

Never heard her say any of that, though. Stephanie offered no highfalutin words about doing the right thing, and she usually didn't complain when I did the wrong thing, which was often. She was a genuine, honest, and decent person, and she simply did the right thing, just about always.

Courageous. Sure, she faced her disability with courage; that goes without saying. But she also lived her life with courage, long before any awful diagnosis, as well as during and after the diagnoses. She was always making plans, setting goals for herself, and bringing her plans to fruition and reaching her goals. If Steph was here today, I wouldn't be sitting and typing; she'd have made plans for our weekend, and we'd be doing something adventurous, maybe something we'd never done before.

Sweet. She was thoughtful, caring, kind, supportive — all the adjectives that describe a wonderful wife and partner. When I needed a hug, she knew it before I knew it. When I needed advice, she had already thought things through, and she always had good suggestions — but she wouldn't tell me what to do unless I asked. Reckon she knew, me being a man, that I wouldn't take advice until I'd asked for it.

Fun and funny. Every dang day we were together, that woman put a smile on my face and made me laugh. You'd think after all our years together, I'd know her sense of humor inside out and backwards, but really, no. Sometimes I thought I knew what she was going to say, but usually she surprised me. She was always saying something unexpected, taking our conversations and our lives in directions I hadn't anticipated. She often made me stop and think, and more often made me stop and laugh.

I could go on and on about Stephanie Webb … for thirteen months now, I have, and I intend to continue going on and on about her, for as long as I'm able. For today, though, let's say this: Steph was never easy to handle, but she was quick to the helm, fast, bright, and everything a boat should be. My, she was yar.
Newer Post Older Post Home