Stephanie and I shared many delightful day trips, leaving memories scattered along almost any highway within 200 miles of Madison. Overnight trips we more rare than day trips, just because a hotel room can be expensive, but once in a while we splurged. One of our favorite splurges was the SS Badger — our last overnight adventure, before Steph went on dialysis. 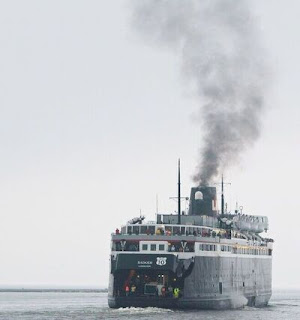 The ship is huge, old, and a little rickety. It carries up to 600 passengers and 180 cars. It's the last working coal-fired passenger ferry in America, so the engine spits a toxic plume of smoke and ash that's probably bad for everything in the water, and will annoy your eyeballs and lungs if you're walking on deck and the dark dusty cloud hits your head.

Still, riding the Badger is a blast. But we're getting ahead of ourselves in the story, so let's rewind.

The years of Steph's health problems have blurred together in my mind, so I'm not certain what year this was — 2013, I think. Stephanie had recently been hospitalized, diagnosed with kidney failure, and she was still absorbing the bad news that she would soon be on dialysis.

Briefly, here are the basics of dialysis, for folks lucky enough not to know: Most patients who need dialysis do it three times per week at a clinic, but people who are more — what's the word?; competent perhaps, or adroit — can do dialysis at home, seven nights a week. Steph was clever enough to learn the rather complicated procedures, and follow those procedures safely every night, so she was planning to do home-dialysis.

When we asked, the dialysis clinic staff always claimed that travel on dialysis was no real problem, and I won't say they were lying but they weren't truthing either.

Traveling while on home-dialysis is possible, sure — in theory. The machine only weighs thirty pounds or so, and fits easily in the trunk of a car. She needed about sixty pounds of special fluids per night, though, and the fluids are in bulky boxes that took up a lot of trunk space. Even before the dialysis started, we already understood that it would make overnight trips much more difficult and less frequent.

For years we had talked about taking a ride on the Badger ferry, but tickets are a little expensive, and Manitowoc, Wisconsin (the near-side port of departure) is a two-and-a-half hour drive from Madison. It's a sixty-mile crossing, and it takes about four hours each way. We'd planned on riding the ferry someday, but we knew, someday had to be soon.

Steph being Steph, she did the research and noticed that passenger rates on the Badger are substantially reduced after Labor Day, so — surprise, we could afford it! We bought two tickets, but it costs a lot more to bring a car on board, so we packed suitcases and left the car in the parking lot at dockside.

She'd been having increasing difficulty walking, so we knew in advance that the ship's narrow, steep walkways and stairways would be challenging for her. The vessel is approaching seventy years old, so it far predates the Americans with Disabilities Act, and thus there are no elevators. There is exactly one disabled-accessible ladies' room on the ship.

Just about the only accommodations for the disabled is a chairlift for passengers boarding and disembarking in wheelchairs, but Steph wasn't in a wheelchair yet, and she insisted on climbing the gangplank and stairways herself. She became exhausted and needed to rest ⅔ of the way up the gangplank from the dock, but after a few minutes leaning on the short rail, letting people squeeze upward past us, she walked the rest of the way to the ship's lower deck. 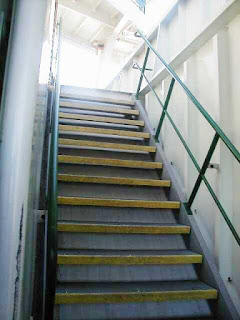 Here, take a look at the stairway → and imagine a crowded ship with thirty or forty stairways just like it. The ship is several stories tall, and we explored every level, but each time we went up or down (especially up) we went slowly, cautiously. I helped her as I could, gently pulling her upwards when she needed a hand, or offering my elbow and shoulder for stability.

Mostly, though, it was Stephanie who did the hard work, and it was hard work for her. At home we had four steps, which Steph found difficult; the SS Badger had hundreds of steps, and Stephanie wanted to climb them all, and she did. And it was tremendously difficult for her.

Let me stipulate that at no point did I talk her into anything, regarding this trip (or much of anything else in our lives). Riding the ferry was Stephanie's idea, she knew it would be a lot of work, and she adamantly insisted that this was something she wanted to do.

As we were planning the trip, after the third or fourth time I asked if she was sure she wanted to do this, she explained it to me plainly: "Riding the ferry is going to be difficult for me now, but in a couple of months or a couple of years it will probably be impossible. I want to do this while I can do this, and that's absolutely that."

So we did it, and we loved it. Once upon a better time, Stephanie and I sailed to Michigan and back on the SS Badger, and we had a wonderful time.

It was mesmerizing to look out the window or sit on the deck, unless the breeze changed and the ash whipped into your face.

The on-board food was rumored to be expensive and not very good, so we packed sandwiches and drinks, and bought only french fries at the concession stands (but they were yummy).

We marveled at the marvelous view, because the middle of Lake Michigan might as well be the middle of the ocean — you can't see either shore, just water everywhere.

Seagulls followed the ship all the way, frequently landing and nibbling on the ship's litter and crumbs. We enjoyed the people-watching, and water-watching and bird-watching and fish-watching.

It was an unforgettable voyage to Michigan, and then a night at some bland chain hotel, and then the voyage back to Wisconsin the next day.

She was right, that while riding the ferry was difficult for her, it would soon become impossible. But she wanted to do it while she could do it, so she did it. It's fair to say, that's a recurring motif of Stephanie's life.
Newer Post Older Post Home