Nuts, and then peanuts 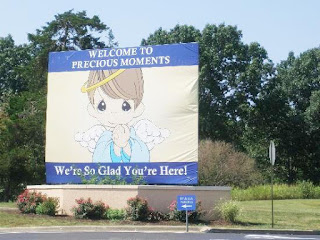 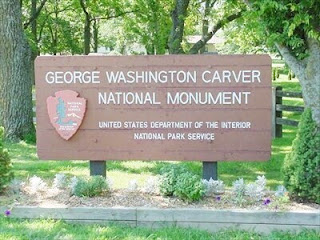 One of our many happy memories was a day trip from Kansas City south about 150 miles, to see the Precious Moments Chapel, and the national monument to George Washington Carver. These two destinations are about twelve miles — and twelve planets — away from each other.

Our visit to Precious Moments Chapel was always and entirely intended as a laugh. When Stephanie proposed the excursion, she had to explain to me what Precious Moments are, so I'll explain it to you: It's a brand name, Precious Moments™, for a huge assortment of porcelain dolls with big eyes and dopey expressions.

You could plausibly argue that each doll, pondered individually, is borderline cute, but the factory churns out countless copies of thousands, perhaps tens of thousands of big-eyed designs. When you're looking at a collection of Precious Moments figurines it's the exact opposite of art; it's the mass manufacture of big-eyed knickknacks.

Most astounding is the chapel, a full-sized church dedicated to, near as we could figure, the worship of big-eyed porcelain figurines. The chapel has pews and a pulpit and stained-glass windows and enormous murals depicting big-eyed flying angels and huge crowds of big-eyed children looking, presumably, for big-eyed Jesus. And yes, Jesus Christ is actually depicted in one of the murals in the chapel, but his is the only face among all the alleged artwork that doesn't have oversized eyeballs.

The general motif of the Precious Moments Mall is Christian, but it's so over-the-top kitschy that it can't be taken seriously. Steph and I toured the grounds and couldn't stop snickering, and even years later either of us could make the other laugh by opening our eyes extra-wide and saying, "Pwecious Moments."

But what we found honestly disturbing was that the Precious Moments Mall was jam-packed with people, and it seemed that everyone but Stephanie and I was treating it as a very serious visit to an art museum or a religious space. By the time we wandered out in a daze and returned to our car, our opinion of the average American's intelligence had diminished by twenty or thirty IQ points.

And then we had lunch and proceeded to the second part of our day trip — a quiet, sparsely-attended memorial to George Washington Carver, outside the town of Diamond, Missouri. I wonder what you know about George Washington Carver, and I'll tell you what I knew going in: he invented peanut butter. That's it. That's all that either Steph or I had been taught in school.

So I'm not sure what we expected from the George Washington Carver National Monument, but we came away astounded. The rest of this entry might be a bit textbooky, sorry, but Steph and I were both seriously amazed by Carver.

Born the son of slaves and orphaned in the Civil War, he was raised by his family's former "owners." He became fascinated by botany when he was a child, but he was 29 years old before he found a college that accepted black students. He earned two degrees in agriculture, then worked on the faculty at Booker T Washington's Tuskegee University, where he studied, advocated, and popularized crop rotation.e

And that's what ought to be the headline about Carver — crop rotation. The Southern economy had been in a tailspin because of many decades of single-crop cotton cultivation, which left the soil depleted of nitrogen. Carver proved that the soil could be revitalized by planting peanuts and soybeans, and that crop rotation (growing peanuts one year, cotton the next, etc.) helped refresh the soil. Wherever it was practiced, crop rotation dramatically increased the cotton yield, but it left farmers with a surplus of peanuts and/or soybeans in alternate years, which sold at a poor price.

To solve this new problem, Carver experimented with soybeans and peanuts, and developed more than 300 new uses for the little legumes, from cooking oil to cosmetics, wood stain to printers' ink, and yes, peanut butter. Within a few years, thanks to Carver, the demand for peanuts and soybeans had grown so much that crop rotation was no longer a financial sacrifice for farmers.

It's not an exaggeration to say that Carver's advocacy for crop rotation saved the Southern agricultural economy. But wait, there's more. He also developed a technique for fighting fungus disease in cherry trees, discovered dozens of new uses for pecans, invented methods to make paints and stains from soybeans, and to make sweet potatoes into flour, starch, synthetic rubber, and more than a hundred other products. He made rope from cornstalk fibers, artificial marble from sawdust, and carpets from weed fibers. And a whole lot more.

I've tried but failed to convey the sense of wonder we felt, strolling the grounds and learning all the above. During our drive home Stephanie and I couldn't stop talking about George Washington Carver. Steph immediately ordered a book from the library about Carver and by Carver, George Washington Carver: In His Own Words, and we each read it. Jeepers, talk about overcoming adversity? He was a very impressive guy, and yet somehow, when his name is briefly mentioned in history class, it's only about peanut butter.
Newer Post Older Post Home