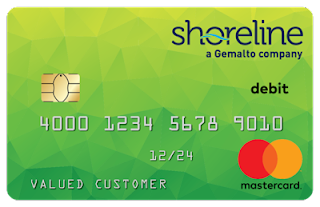 Here's another memory, one that occurred to me as I made the ordinary twice-weekly grocery run this morning.

This story takes place in Madison, in the early 2000s. Steph was still perfectly healthy, but she only came with me to the grocery when she wanted to personally pick the meats and veggies for something special she was planning to cook. For the most part, she'd taught me how to select the right grade of beef, and the right color of onions and the desired ripeness of the bell peppers, so I usually went to the grocery store alone.

We had always shared the debit card connected to our bank account, and it was green plastic so we called it the green card. Getting a second debit card would've incurred a one-time fee of an extra five or ten bucks, and in San Francisco we were broke enough that every dollar mattered. Same thing in Kansas City, where even though the card was blue we still called it the green card. Same thing when we moved to Madison.

"Would you like an extra debit card?" they asked at the bank, and we asked what it cost. Whatever the answer, it was too much, so we shared one card. We went most places together, so the green card was usually with us, and when one of us went out alone, it was just something you briefly doublechecked, like "Do I have my keys and wallet?" Do I have the green card?

It was never a problem, until the time I went shopping at Woodman's, the big but cheap grocery store in town, and I forgot to bring the green card. I'd taken the bus, which only runs every half-hour, so it would've taken at least an hour and a half to ride a bus going home, get the card, and ride the bus back. The folks at the store were nice about it, and stashed my groceries in their backroom refrigerators and freezers, while I called Stephanie.

She laughed, said she'd be there in fifteen minutes, and she got dressed and drove to the store and paid for our groceries, and never gave me the slightest shade for forgetting the green card. Well, OK, she teased me a little, suggesting that my dementia was getting worse, or that if I wanted her to come to Woodman's with me, why didn't I just ask? But it was good-natured ribbing, and it was obvious that she wasn't even slightly annoyed, really.

And then, when I did the exact same thing a few months later, she responded exactly the same — with a smile instead of annoyance, and a quick drive to rescue me and our groceries. But the next time she went to the bank, she came back with a little surprise for me — a second green card.

"We're not as poor as we were when we moved to Madison," she said, and while that was true — the five or ten bucks no longer mattered much — she also could've said, "It's worth ten bucks to know that when you go to the store, I won't have to come bail you out." But Steph was always the sweetest banana in the bunch, so she never said anything like that to me, and probably never thought anything like that.

And it's a memory that flashes through my brain every time I'm buying groceries at Woodman's, paying with the green card. Just another happy memory out of thousands, always playing on the big screen behind my forehead, on random shuffle like the music on your playlist. I never know what memory will pop up next, but they're mostly good memories, and even the bad memories are better than life without her.
Newer Post Older Post Home