In part one of the kidney chronicles, we talked about appointments that the Kidney Clinic made and then simply forgot about. Today, for part two, let's talk about blood draws. And yes, we're beginning with minor complaints, but it accumulates like snow during a Wisconsin winter. 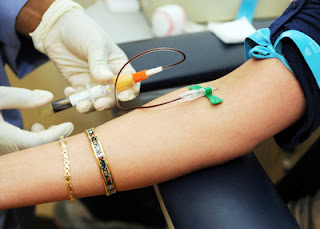 Stephanie needed to have medical tests run, every month — it was required, whether she was feeling great or feeling poorly. The blood tests were to measure her body chemistry, to ensure that her dialysis was doing the chores her kidneys couldn't do, removing the toxins from her blood. The tests made sense, and of course we had no objection, but …

There's a medical clinic a few blocks from our house, that's part of the same conglomerate that runs the Kidney Clinic — same branding, same employee badges, same insurance card. The Kidney Clinic is closed on the weekends, but this nearby, convenient clinic is open on Saturdays, so if Steph could've had her once-monthly blood draws there, she wouldn't have had to take quite so much time off from work. As I've mentioned, Steph's workplace was not exactly sympathetic to her medical absences, so she was always worried that they'd fire her for taking too much time out of the office — and she was right. She was eventually fired, for missing too much work time, for medical appointments.

Stephanie asked, several times and always politely, whether her required monthly blood samples couldn't be drawn on a Saturday, at the clinic near our home, instead of taking two hours during Stephanie's work, at the Kidney Clinic several miles away. Again, it was the same coverage, the same blood, and they'd be sending it to the same lab for testing.

But the answer was always no, your arm must be poked and blood drawn here, at the Kidney Clinic, Monday-Friday, and nowhere else. The "why" of it was frustrating, too.

First, it was "So we can be certain it's your blood being drawn" — as if Stephanie would hire an imposter?

When Steph asked again a few months later, the answer was, "It's so we can visually assess your health," which makes a tiny bit more sense, but isn't that something that any competent technician does at any blood draw anywhere?

Eventually, though, we sussed out the real answer: Steph could only have blood drawn at the Kidney Clinic in Fitchburg, because they wanted to pepper her with "educational" moments — a presentation on some aspect of dialysis, followed by a photocopied quiz, always about stuff Stephanie knew by heart because she'd been through their training to do dialysis at home, and because it's on posters all over the building at the Kidney Clinic. The topic this month might be checking the expiration date on your nightly pack of fluids. The topic next month might be what an infected catheter-site looks like. Every month, a new lecture and quiz on another topic Steph already knew. Really. Basic. Stuff.

For folks unfamiliar with the intricacies of dialysis, try this: Imagine that you're going to a doctor's office, not to see your doctor but just to have blood drawn for tests. First, they make you go to a clinic far from your home, instead of the clinic that's right down the street. Then, when you get there, before they jab you with a needle, you have to sit through a five-minute lecture on something you already know — like, how to put on a Band-Aid, or why you should wash your hands after going to the bathroom. Really. Basic. Stuff. And then you have to take a test, or sign a document stating that you understood the lesson.

The first time, you might find it funny, and wonder why they think you're a grade-school kid. But imagine that you need to come in for these blood tests every month for the rest of your life, and every month for the rest of your life you'll need to drive to a distant clinic, and then sit through another lecture and test on another aspect of health that you already know very well — why green vegetables are good for you, or why you should wash the kitchen counter after prepping raw chicken — before the needed blood draw. After a while, it went from being funny, to frustrating, to unfathomable.

To be clear, the little lectures and lessons weren't about green vegetables; they were always about the basics of dialysis, kidney health, catheter maintenance, and such — but if you're on dialysis, this is stuff you already know.

Bottom line: The reason Steph's blood draws had to happen during work hours at the clinic five miles from home, instead of on Saturdays at the clinic within easy walking distance, was so she could be re-re-re-educated on dialysis, every month. It was mind-numbingly unnecessary, and yeah, it was frustrating.

And also, twice, the Kidney Clinic lost the blood samples they'd drawn from Stephanie, so the whole trip to Fitchburg during Steph's work hours turned out to be moot. As with the many appointments the Kidney Clinic made and then forgot, once is a mistake anyone can make, but after that it seems more like simple sloppiness.