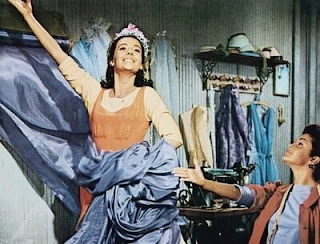 There's a great song from West Side Story, called "I Feel Pretty." You know the tune, and the lyrics begin,

I feel pretty,
Oh, so pretty,
I feel pretty and witty and bright!
And I pity
Any girl who isn't me tonight.

Stephanie and I saw the movie together, when it played in revival at the Regency in San Francisco, circa 2000. We enjoyed the film, but she never sang that song.

She thought she wasn't pretty. She didn't bring it up often, but often enough that I knew she believed it. And she knew that I disagreed, but like most of our arguments, I never convinced her I was right.

We were together for more than twenty years, sixteen hours five days a week and 24/7 on weekends and holidays, and there's just about nothing we didn't talk about in that time, so we talked about this. When we did, it was painful for both of us, but more painful for Stephanie, of course.

Today I'm reconstructing those recurring conversations on that delicate subject, sewing together some of the sentences we said, and making it all into one conversation. It's twice as long as any of our discussions about this really were, but it has the key elements from all those conversations intertwined, and I think Steph would agree that it's a fair summary.

"… So that's what happened, that's what he said," she said. "He just didn't take me seriously. He would've listened more closely and given my words more consideration if I wasn't a woman, or if I was pretty."

"Well, I'm not disagreeing that he dismissed what you said because you're a woman," I said. "I've seen it before, and I know that happens. And I'm not disagreeing that he didn't care because maybe in his eyes you're not drop-dead gorgeous. He's a dumbass, absolutely. But you couldn't be wronger when you say 'if I was pretty.' Flush that thought, lady. You are pretty."

She looked at me, a skeptical smirk on her pretty face, said nothing for a moment, and then said, "It's sweet of you to say always that, but c'mon."

"C'mon nothing. Pretend this isn’t your husband talking, but just a straight man who likes looking at pretty women. You're a pretty woman."

"There's a mirror in the bathroom, Doug. I look at myself every morning. I've been looking at myself for years and years, and never yet have I seen a pretty woman looking back."

"Yeah, well, that's just, like, your opinion, man." A line from one of our favorite movies, The Big Lebowski. We often tossed movie dialogue at each other.

"Eye of the beholder, love. When I behold you, I see a pretty woman."

"You said 'love,' and that's the problem," she said. "You love me, and that makes your opinion unreliable. Completely subjective."

"It's subjective, maybe, but not completely subjective. Me saying you're pretty is an unbiased, objective assessment of my subjective opinion." Yeah, we actually spoke like this sometimes, using half-assed academic jargon that Stephanie understood and I probably didn't quite.

"If I say you're thin and muscular, are you going to believe me?" She smiled and chuckled as she said it, reassurance that she wasn't trying to hurt my feelings. And I sure as heck didn't want to hurt her feelings, either. It was a difficult conversation, every time.

"No, we both know I'm fat and flabby. That's just the truth."

"But you tell me I'm pretty," she said, "and I'm supposed to believe that's the truth?"

"OK, debate me," Stephanie said. "Resolved: I'm an objectively un-attractive woman. Evidence: The number of men who've told me I'm pretty is three, and the number of men who've said that when they weren't trying to get into my pants is one — just you. Three-billion men in the world, and the only one who thinks I'm pretty is my husband? That's serious evidence that I'm not pretty. Now, dispute the evidence if you can, but leave your emotions out of it."

See, this is why I hated arguing with Stephanie. She was smarter than me, and even when she was wrong she could always out-think me and out-reason me.

I sighed, put my hands together, probably looked up at the ceiling to gather my thoughts and words. "Just facts, no emotions: It is nuts what our society does to women. From TV and movies, from advertising, and in just about everything from bikinis to billboards to Barbie dolls, the subliminal message is that a woman who's young and pretty is valuable, and a woman who's not so young or not so pretty is worthless, or at least 'worth less' — and that's rubbish."

"It's rubbish, yes," she said, "but that's the perception, and perception is reality."

"The reality is that you're pretty, subjectively and objectively, but all the wonderful intangibles that you add to the world aren't about being pretty. They're about what you think, what you say, and especially what you do. You make the world better, Steph, objectively better. And subjectively you make my world one hell of a lot better." I probably shrugged.

"Well, thanks," she said, sincerely but halfheartedly.

"Nope," she said, "but you go right on thinking that, and saying that."

And I did. I always thought that, always said that, and I still do and always will.
Newer Post Older Post Home