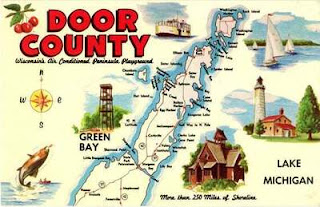 We only made one trip to Door County, Wisconsin's second-most famous tourist trap. It's on the other side of the state, a couple of hours from Madison, and like all of our adventures, going there was Stephanie's idea. She'd been to Door County before we'd met, with her family when she was a kid, and with friends when she was in college, and she'd enjoyed it and wanted to return.

This was circa 2013, when Stephanie had been having leg weakness and difficulty walking, but the doctors didn't yet know why. She had a sit-down job, so she was able to continue working, but the two-minute walk from the parking lot to her desk was taking five painful minutes, and she was wobbly on her feet. I wasn't sure whether a touristy weekend trip wouldn't be a good idea.

We barely even talked about that, though, because it wasn't necessary. Planning was one of Stephanie's strong points, so in addition to organizing our itinerary for the trip, I knew she'd also calculated how she'd get around on her limited-access legs.

"I want to see this and that," she said, or words to that effect, "and eat here and there." The details aren't important now; what matters is that she then said, "I'll need to be careful about how far I walk and how long I stand, but you don't need to worry. My legs hurt all the time when I'm standing or walking, so I'm not going to stand too long or walk too far. If there's a long line at a restaurant, I'll wait in the car until you raise an arm to signal me." Point of all this is, I knew she'd thought everything through. Didn't stop me from worrying, though.

Stephanie had told me to expect a lot of crowded shops selling overpriced geegaws, because tourist money keeps the Door County economy cooking. And yup, there was plenty of that. But she promised pretty scenery, and lovely parks, and some actually interesting shops, and other things we could do together. And indeed, we had a very nice time.

We stopped at Seaquist Orchards Farm Market, a big place full of somewhat overpriced produce and their own branded jellies and jams and such. We bought two jars of pumpkin-butter and a couple of fancy jellies that we both loved, and yeah, Stephanie stood and walked in the shop for longer than she'd intended, and her legs were hurting by the time we left.

We stopped at a brewery, the name I've forgotten. Stephanie didn't quite trust me to buy the right beer, but her legs were still hurting so she told me what she wanted, and we crossed our fingers — and I found a palatable brew, surprising both of us. We drank most of it that night, at the Super-8 Motel.

The Super-8 kinda sucked, though. Our room was across the hall from the pool, and the air was heavy with heated and chlorinated moisture. We had a non-smoking room, of course, but still it smelled a little of cigarettes. They offered to switch us to a different room, but we were exhausted and Stephanie said no, thanks. With the combination of tobacco and chlorine, she didn't sleep well, but she only mentioned it in passing.

The next day we had a picnic at Peninsula State Park, eating pumpkin-butter and jelly sandwiches, and drinking what little beer remained from the previous day. A cop car came inching past, and we wondered if they were eyeballing us. Is it illegal to drink beer in the park?

We stopped at an antique store, a long uphill walk from the parking lot, and then up several steps from the walkway. It was obviously difficult for Stephanie, and she held my arm as we went up the steps. We spent too much time (and money) inside the shop, with Steph fascinated by much of the merchandise, and me increasingly worried about her steadiness. We bought a few things, but the only item certain in my memory is a ghastly crocodile head (small, but genuine) that's still on the shelf in our front room. We walked back to the car, Steph holding my arm all the way, but she hadn't complained even once, until she sat down in the car and said, "Oh, God."

We stopped at another trinket shop, but only stayed for a few minutes before Stephanie motioned that she was ready to leave. "Are your legs too painful?" I asked. "Should we call it a day and head home?"

"My legs hurt like the dickens," she said, "but that's not why I wanted to leave. Couldn't you see almost instantly, everything they had was plastic or made in China. We can buy fake stuff like that anywhere, probably cheaper. We didn't come to Door County to buy what they're selling at that place."

Then we called it a weekend, and came home. We'd had a nice visit to Door County, but not so nice that we were eager to go back. Indeed, we never did return, but we ordered some more pumpkin-butter from Seaquist Orchards, by mail.

There are thousands of memories of Stephanie, but there are a few moments that, for no reason at all, remain etched in my head like a snapshot. Just a moment frozen in time, and always they're happy moments. One of those is the crystal-clear memory of Stephanie and I, driving through some small town, on a sunny afternoon, on our way home from Door County. We're sitting at a traffic light, me looking at her, her looking at me, both of us as happy as could be. Just one of the best moments ever.

Did you think this story was building up to Stephanie falling over? Nope, that's not her. Despite walking on malfunctioning legs for a long while before her eventual amputation, she only toppled once, and this wasn't that once. My girl was tough, dang it. She always pushed her limits, but she also knew her limits.
Newer Post Older Post Home