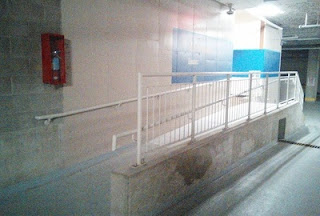 By late 2015, Stephanie had been in her wheelchair for several months, her amputation was coming soon, and we knew she'd be disabled for the rest of her life. It was, of course, awful in almost every way, but she became accustomed to using ramps instead of steps, and everything else about being disabled.

There are lots of things about getting around in a wheelchair that most people never think about, until they're getting around in a wheelchair. Obstacles couldn't just be "sidestepped" any more. She could roll into most restaurants and businesses with no problem, but there were some buildings where she needed to use a special entrance, and there were a few buildings we wouldn't be able to enter at all. I say "we" because if Steph couldn't get in someplace, I sure as heck wasn't going in without her.

Why were there places she couldn't enter? The Americans with Disabilities Act (ADA) opened many buildings and doors for the disabled, leading to curb cutaways for wheelchairs, and public toilet stalls big enough to fit a wheelchair, and so much more. Thank heavens for the ADA, but most buildings that predate the legislation (1991) weren’t required to retrofit and become wheelchair-accessible until and unless the owners did a major remodeling of the facility. That's a heck of a loophole, when you're outside someplace and you can't get in.

As Stephanie and I were learning about life with a disability, I noticed something else I'd never noticed: My own workplace was inaccessible.

Built in the 1960s, it's a short skyscraper in downtown Madison, and it's been occasionally painted and recarpeted but never remodeled — so it's exempt from ADA requirements.

There's a parking garage underground, but there was no disabled parking. And if someone in a wheelchair did park in the garage, they'd need help getting inside — the building had no automatic doors.

Could a disabled visitor or employee park on the street? Well, yes and no. This is Wisconsin, where it snows a lot. If someone in a wheelchair parks on the street and it snows, how's he/she going to scrape four inches of frozen icy snow off their windshield? Maybe we should let them park in the underground garage?

Plus it's downtown, so parking on the street is metered and difficult to find. And the building is on a hill so steep, the sidewalk actually has steps — so the building wasn't just inaccessible, it was almost anti-accessible.

I wrote an email to the lady who runs our company (the CEO's secretary) laying all this out. Wasn't sure what to expect, but I work for a pretty good company. She responded in ten minutes, with just a couple of sentences, saying in effect, "Holy crap, I never thought of this at all, because we've never had any employees in a wheelchair, but I will bring this up with the CEO when I see him tomorrow."

Two weeks later they eliminated one parking space to add a disabled space in the underground garage. A week after that, a truck and two workers arrived, and started building a ramp inside the garage, leading to the building's lower-level entrance. They also installed a device that hydraulically opens the door when a button is pushed, allowing access to the elevators inside.

I asked the CEO's secretary how much money they'd spent making the building accessible, but she didn't want to tell me. Googling around, my guess is at least $15,000. That's not a lot for my employer, but it meant a lot to me. They weren't required by law to do it, but they did it, and now if someone in a wheelchair needs to get into the building, there are no obstacles.

I wasn't sure about telling all of this, because it's maybe more about me than about Stephanie, but what the heck.

With a single email I was able to get a wheelchair ramp at my workplace, but at home our landlord had said no. We couldn't afford to install a ramp ourselves, and moving seemed impossible, so Stephanie used a wheelchair but lived someplace that wasn't wheelchair accessible.

We bought a bulky portable ramp, which I was happy to set up and break down every time Steph needed to get up and down the stairs, but she never had the simple independence of being able to come and go from her own home, in her own wheelchair, without help from me.

She never complained about it, because patience was one of her superpowers, but it infuriated me, and still does.

Steph never visited me at work, but the first time she came to pick me up there — we were going to a movie that night — she laughed and said that she'd temped in that building, just for a few days, years before we met. What are the odds on that?, we wondered.

For the past few months, I've rarely been in the building myself. I'm working at home because of the pandemic, and only going into the office once every couple of weeks, to pick up and drop off paperwork. It's always after hours, usually on the weekend, and I'm the only person in the building.

This morning at around midnight, I parked in the underground garage. Three heavy boxes coming and going is more than I wanted to lift and carry, so I loaded and pushed one of the company's office-carts up and down that wheelchair ramp. Pushed the button to open the door, instead of struggling to manage both the door and the cart.

It occurs to me, I've still never seen anyone in a wheelchair use that ramp or the door-opener at work, but I don't care. It's there and that's as it should be.

Almost all of the company's employees used the ramp when the coronavirus crisis came in March, as we were all loading equipment and files into our cars to start working from home. And I've been using it a couple of times every month.

Is it nuts that I think of it as Stephanie's Ramp? Probably. And this might be nuts too, but last night, after loading stuff into our car, thinking about all this as I pushed the empty cart back into the building, I kissed the ramp's metal railing and said, "I love you, Steph."