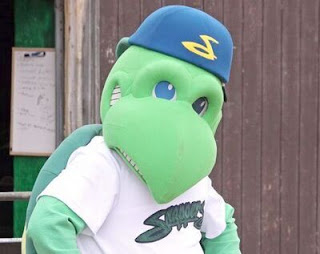 The coronavirus has scuttled much of the 2020 baseball season. In the major leagues, they're gearing up to play just now, what would've been four months into the season, and I'm skeptical about it. Baseball is fun, but there's a pandemic on and I'm not at all convinced that it's safe to play ball, even in empty stadiums.

As for minor league baseball, they've already cancelled the entire season, and I don't have to wonder what Stephanie would think about that. We were agreed on many things, Steph and I, certainly on baseball, and I know she'd be as apprehensive about pandemic baseball as I am, and disappointed at having no minor league games in Beloit.

Today's entry is about Stephanie & baseball memories, so let's start in San Francisco, where we first met. Girls aren't supposed to like sports, or at least that's what people say, but Stephanie liked sports, especially baseball. She didn't have to "try" to like it, as a favor for me. Nope, she just liked baseball. We went to a game on our second or third day together, and it was Stephanie's idea, not mine. We went to another game that week, and baseball was part of every summer.

In California, that usually meant Oakland A's games, in their huge, mostly empty concrete stadium with the freaky tall seating section in the outfield, added to placate the then-Oakland Raiders, who played in the same park.

We usually bought a program, because Stephanie loved the "stories" of baseball — that's what she always called anything she could glean about a player's career. This guy hit a home run in his first minor league at-bat. This guy's father played minor league ball twenty years ago. This guy overcame pneumonia that cost him half of the last season. She enjoyed baseball just for baseball, but she enjoyed it more when she knew a player's story, so — "Program, get your program! — we always got the program.

The A's had two brothers on the team, Jason and Jeremy Giambi. Jason was a fairly big star, known for hitting home runs, and later revealed to be cheating by taking steroids to jack more home runs. Jeremy was a lesser talent, but Stephanie loved the story of the kid brother joining his big brother on the same team. Steph said that the A's had "Giambi reserves" — a spare Giambi on the roster.

She sometimes asked me about the intricacies of the rules — long ago, I was an umpire — but I think she was just flattering me. Stephanie knew most aspects of baseball better than I ever did. She once asked me to explain the infield fly rule, and I explained it wrong, saying "with runners on first and second" but forgetting to say "or with the bases loaded." I actually noticed that I'd misspoken, but I was blabbering fast and already onto my next sentence, so I didn't bother to correct myself. Steph listened politely until I'd finished, and then she said, "The infield fly is also in effect when the bases are loaded, isn't it?"

She liked keeping score, too. That's the baseball shorthand of jots and squiggles and abbreviations, to record what every batter does, all through the game. Steph was  smart and curious and caught on quick when I showed her how scorekeeping works — so quick I suspect that she'd also researched scorekeeping on the internet. Whether I was her teacher or Google, once she'd mastered it, she always wanted to keep score for at least the first few innings of every game.

In Kansas City, baseball was less fun than in California (everything about Kansas City was less fun, to be honest). We didn't have a car for our first few years there, and Kansas City doesn't have a fraction of the San Francisco-area's public transit, so just getting to Kaufman Stadium was daunting, and also expensive.

Only once did we actually see the Royals play, and it was kind of a disaster. Someone was in our seats and wouldn't yield until we flagged down an usher, so we missed the first half-inning. The lady in front of us and  the man behind us were both loud jackasses, screaming painfully and seemingly drunk. The concession stand sold us stale hot dogs, and Steph only had two bites and got sick, so we left the game and waited in the bus for an hour. You come by bus, you leave by bus, and the bus doesn't leave until the game is over.

In our part of Wisconsin, there's only minor league baseball. Madison has a team called the Mallards — we went to one game, and felt really crimped by the crowd. Went to a second game several years later, and the stadium had been remodeled and made worse. The Mallards are wildly popular here, so we knew ours was a minority opinion, but we just found Mallards games unbearable.

Instead we went to minor league baseball in Beloit, fifty miles away, but we went quite often. We must've made that road trip dozens of times, and almost always had a fabulous time. But I've already written about baseball in Beloit, and about our Mallards experiences, too, at this link.

What I'd add about Beloit is, that's where we were attended baseball games both before and after Steph became disabled. Because of that, I think, it held a special place in our hearts.

Before her amputation, she wasn't sure what life would be like after, but one of the first things we did "after" was baseball in Beloit. She was tremendously excited about going, returning to something normal in life, like baseball.

It wasn't exactly the same; we sat in the disabled section, instead of wherever we felt like sitting. The disabled stall in the ladies' room was tiny and cramped, but she could pee there so, no worries. And she needed the ladies' room more — before the amputation she'd always had a hot dog and a beer, but after she was disabled, and I was driving instead of Steph, she could have two beers.

At her first post-surgery baseball game, Steph had so much fun. She sang "Take Me Out To the Ball Game" at the seventh-inning stretch, even though she couldn't get out of her wheelchair to stretch. She shouted "Hey, batta batta batta" to taunt the opposing team's hitters, same as always. She even chatted with Snappy, the Beloit Snappers mascot who walks throughout the stadium during the game, joking with kids and grandparents and pretty much anyone who can take a joke.

"We went to a baseball game," she said in the car, on our way home. "Just like normal people, even though I only have one damned leg." She said it with a gigantic smile on her face, positively giddy about how much fun she'd had. And ten miles further down the freeway, she said it again. Stephanie was maybe a little tipsy from the beers that evening, but mostly she was happy. Baseball always made her happy, but especially that one time when she really needed some normal-people happy.
Newer Post Older Post Home