Stephanie and I didn’t have many ‘bad dates’. Even when the food was lousy or the movie sucked or the bus was late, we almost always had a good time just being with each other. 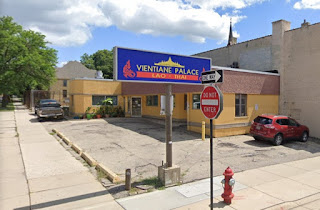 One of our worst dates, though, was perhaps twenty years ago. We were visiting Madison (we hadn't yet moved here), and walking up and down State Street. We were having a marvelous time, until we decided to lunch at the Vientiane Palace.

Maybe it’s pertinent, so I’ll mention that despite the ‘Palace’ in its name, this was not a highbrow place. From the outside, it was nondescript, and inside it was nothing fancy. It smelled good, though.

When we walked in, the restaurant was empty — no employees, no customers, and nobody greeted us. We looked around, and after a bit, Stephanie said, just loud enough that her voice would reach the back room, "Is anyone here?" There was no answer.

We waited, then doublechecked the hours on the door, which said they'd opened hours earlier. Steph and I had been walking all afternoon, so after waiting a few minutes, we seated ourselves at a table.

We weren’t in any particular hurry, and we weren't grumpy or huffy. We had a long, quiet, un-interrupted conversation, before Steph politely called out again, "Hello? Is anyone here?"

It was at least ten minutes before a waitress appeared. She may or may not have sighed and said, “Oh, jeez,” when she saw us, but if she didn’t say it, it was implied. She did not smile, did not say hello, and complained that we’d sat at a table instead of waiting to be seated.

We didn’t say anything, but — was sitting down unreasonable? How long would you stand and wait in an empty restaurant?

She didn't bring menus, but the waitress asked if we wanted anything to drink. We said, “Water, please,” and she disappeared behind a door. We never saw her again. Twenty minutes later we left.

My charitable assessment is that the waitress saw us, and forgot us. Steph suspected it was more intentional: the waitress didn’t want us there, because we were fat and poor (asking for water = poor).

Well, we were fat and poor but also hungry. When we found someplace else to eat, Stephanie told me about other times she felt she’d been treated rudely for her appearance. I thought she was an attractive woman (I was always attracted to her) but Steph thought — and she’d been told, by rude bastards — that she was too short, too plump, too plain-looking. It hurt her.

Perhaps she was over-sensitive to such slights, I thought, because I don’t give a damn what anyone thinks of me, and if you think I’m a piece of crap I might not even notice. Several times through our years together, though, Stephanie pointed it out to me, when people who came in after us were served before us, or when other customers got big smiles, and we were seated in the back, by the kitchen.

Eventually, I decided that she was right. It didn't happen often, but it happened. We weren’t the kind of people certain businesses want as customers.

The Vientiane Palace was on a busy street, and we often drove past it. Sometimes, Steph would say, “Remember when they wouldn’t serve us lunch?”, and she'd flip off the place as we went by.

There were usually cars in the parking lot, people going in and coming out, so presumably some customers were served, enjoyed their meals, and maybe even came back. We never did.

It's silly and stupid for me to hold a grudge all these years later, but I do. We were having a nice afternoon, we wanted a nice lunch, and instead, that restaurant made my wife cry a little.

I drove past the 'Palace' again a week ago, and it’s out of business. I smiled when I saw that, and tapped Steph’s empty seat in the car. “Hey, honey,” I said, “Remember when they wouldn’t serve us lunch?”