It’s been three years, today, since Steph died. Sometimes, a few hours pass without me remembering her, but never much longer than that.

I still stand at the shrine in the living room several times every week, looking at one of my few pictures of her (she hated being photographed) and going through her things on the shelves, and all the memories that accompany the things.

The living room is a mess, though. I’m a slob, and without Steph needing a clear path for her wheelchair, the apartment has gotten cluttered and sloppy. I don’t think she’d disapprove, though. “You kept it neat for me, and I appreciate it, but now you don’t have to vacuum or clean up so often.” Thank you, love.

It’s becoming a tradition, I guess, that on Stephanie’s birthday, and today, Stephanie’s deathday, I go to Olbrich Gardens, the local botanical park. I’ve always liked Olbrich, and she loved it. It might have been her favorite few acres on earth. It’s free admission, which we appreciated so much when we were poor, that we became donors when we weren’t so poor. And it was the first place we ever went, or heard of, that let us borrow a wheelchair. Steph was still walking but it was getting difficult for her, and that afternoon was a joyous treat.

At Olbrich, we always walked the grounds in the same order, along the same paths among so many paths. I still walk that path, every time. When the weather is right and the flowers are in bloom, being on that path, in that park, is almost like being with her.

Life without her has gotten … less painful, or it’s a pain I’m accustomed to. It’s an ache that never heals. Day-to-day crap keeps my mind occupied, but always Stephanie comes around a corner at any moment, surprising me with a happy memory, or sometimes a sad one — or just some strange ones, like today at the doctor’s office.

Steph, being in not so good health, always had doctor’s appointments on her calendar, and I was always with her for them. It can’t be true, but it feels like we saw every doctor in the county.

Since she’s been gone, I haven't seen a doctor at all. It's not fair, how damned healthy I am. Yesterday, though, the doctor’s office called and asked me to get some routine lab tests, so I went to the Union Corners Clinic this morning.

Of course, I’d been to that clinic many times with Stephanie.

Today I walked past the patient drop-off at the front door, where I’d helped her into her wheelchair so many times, and then she’d rolled into the building while I parked the car.

Stepped inside and passed the pharmacy, where I’d picked up her prescriptions.

Passed the check-in desk, where she’d once gotten understandably angry after waiting an hour, only to discover they’d somehow ‘forgotten’ her appointment.

Passed the ladies’ room, where I’d once helped her force a malfunctioning door open.

And then I stepped into the same waiting room where we’d first discovered The New Yorker, which we later subscribed to, and still do. There were no magazines today, though — I guess the clinic has canceled all their subscriptions, because of COVID.

A large sign on the wall said, “Seating closed to maintain social distancing,” but 11 people were sitting in 15 chairs. Stephanie would've laughed at that. Go through years of dealing with doctors, and you learn to laugh at the stupidity of some of the “medical rules,” like that sign on the wall, universally ignored. Instead of sitting, though, I leaned on the wall.

Another sign, this one electronic, said, “Urgent Care wait times,” and estimated that the wait for ‘urgent care’ would be three hours. And I laughed, because we’d waited in that room for urgent care, for Stephanie, some years back. We'd waited longer than three hours, and eventually Steph sighed and said, “’Urgent.’ You keep using that word. I do not think it means what you think it means.” (It’s a line from The Princess Bride, a movie Steph used to like a lot.)

I wasn’t there for anything urgent today, so I only had to wait about twenty minutes. When they called my name, I followed the phlebotomist toward the room for drawing blood. After some chit-chat, while she was prepping the vials, I said, “I’ve been in this room before, with my wife. She’s gone now.”

The lady said, “I’m sorry to hear that.” Just a nice platitude, and she went on with her work, tying a knot around my arm and stabbing me with a needle. After she’d drained half a gallon, though, she looked at me and said, “Was she in a wheelchair, your wife?”

“Yeah,” I said, a bit startled. “How can you possibly know that?”

“I’m good with faces,” she said. “I remember you, and you were with a nice lady in a wheelchair. And she was a difficult stick.”

I laughed. Hadn’t heard that complaint in years, but yeah, Stephanie had tiny veins, and many of her blood-draws were frustrating pokes and re-pokes and re-re-pokes.

“I’m sorry for your loss,” she added. Again with the platitude, but it’s appreciated.

“Thanks,” I said, and she changed the subject and I’m glad she did, because my eyes were watery.

Steph told me a few times, “We must be quite the sight — a big bearded guy pushing a one-legged woman in a wheelchair.” She was right again, as usual. Quite the sight, and they remember us at the clinic, even when it’s just me.

On my way out of that place, I thought of when we’d first moved to Madison, and settled in this neighborhood, called Union Corners. There'd been a diner here, where the clinic is now. Steph and I had eaten there, when we were new in town and still looking for a favorite restaurant, but it wasn’t very good. Then the diner was torn down, making way for a big development project, which never happened. Ten years later, they built a clinic here, and we became regular customers.

Behind the clinic are railroad tracks. Before all the troubles, when Steph was healthy, we’d walked those tracks, after eating at that diner. A long walk, past some weary houses, through what used to be a clearing, and then beside homes along quiet streets, to Olbrich Gardens. It was a couple of miles, each way, and Steph and I were lazy, so usually we drove. But we could and did walk to Olbrich from here, a few times.

I sat in the car, looking at the railroad tracks, remembering those walks, and the lady I’d been walking with. “Love you, sweetie,” I said. Then I took a picture, started the car, and drove home not quite without her. 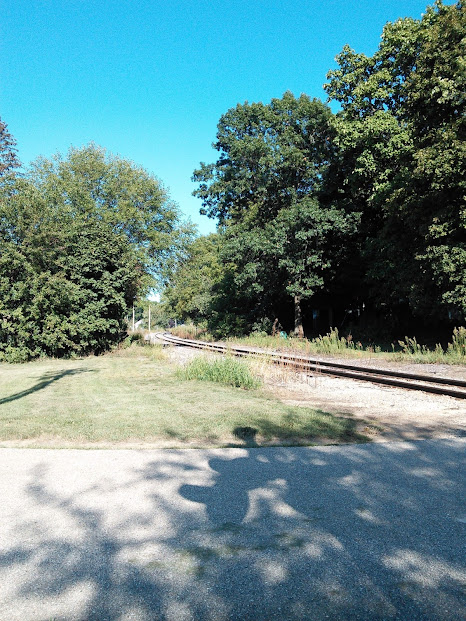