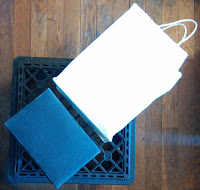 I took the ashes because I was supposed to, but with no plans for them. They're only ashes, not my wife, you know? After a nice campfire, the ashes are not sticks and logs.

In 3½ years since then, Stephanie's ashes have stayed in the box. Her parents took a handful, and I stashed a very small helping inside a small, laminated wood memorial which, of course, is coming to Seattle with me.

What about the rest of the remains, though?

Steph had told me she wanted to be cremated, but she never said what to do with the ashes. Now that I'm leaving Madison, suddenly but with certainly I'm sure she'd want her ashes spread around this town.

Stephanie loved Madison. She went to college here, and she and the city adopted each other. We met and first lived in San Francisco, and she loved it there, too, but always she felt homesick for Madison, so eventually we came here, to the place she liked best. I was so happy to see her so happy, Wisconsin became home to me, too.

Clearly, some of Stephanie needs to stay here, so over the past few weeks, I've spent an hour at a time at several of Steph's favorite spots in Madison, taking memories away, and leaving ashes behind.

Now there's a whisper of Stephanie at Tenney Park, where we had a hundred picnics, and sometimes brought our cat Minky on a leash.

Some of Stephanie is at Olbrich Gardens, the sprawling mile of bushes and flowers and ponds we loved to stroll in springtime, summer, and autumn every year.

Some of her is at WORT, the non-commercial radio station where Steph volunteered, which was always the first button on our car radio.

Some of her is at the zoo, one of America's last without an admission charge. Being free made us regulars while we were poor, and donors after we weren't so poor.

I've scattered some essence of Steph in the front seat of our car. Why not? I want her beside me for the long drive to Seattle. When the car eventually won't go any further, I'll sprinkle some Stephanie inside the next car, too.

And I've scattered some of her ashes in this apartment. She's the one who decided we'd rent this place, instead of another apartment we'd looked at (which burned down a few years later). The rent's been cheap here, and most of the neighbors haven't been obnoxious, it's been our home, and it's been a happy home.

First, the Highway 18 Drive-In theater, where we watched so many movies from folding chairs, or from inside the car, behind windshield wipers if it sprinkled or snowed. The drive-in is closed for the winter, though, and I'm not going to scatter my wife's ashes on the side of the highway.

And the Beloit Snappers ball park, where we enjoyed dozens of minor league baseball games. They're tearing it down to build a fancy new stadium, the kind of place where tickets will be too expensive for folks like Stephanie & I. They're even changing the name of the team. So screw 'em.

Most of Stephanie's ashes are still in the black cardboard box, in the white paper bag, packed for the move.

Steph never visited the northwest, has no connection to Seattle except me, but my intent is to die there. Not soon, I hope, but inevitably. When I do, cremate me please, and after that, one final request:

When my ashes come back from the crematorium, kindly unscrew the lid and pour the rest of Stephanie's remains inside with me. After that, I don't care what you do with the powder — keep us in an urn, scatter us to the wind, melt us into an objet d'art, or flush us down the toilet — it's no concern of mine, because I won't be in there and neither will Steph. We'll be together, though, and that's all I want.