When she was thinking things over, Stephanie liked to chew ice cubes. She did a lot of thinking, and could easily go through a full tray of ice cubes in an afternoon. Guess you could call it a nervous habit, like whistling, or twiddling a spinner.

When I left for work in the morning, I always brought Steph  her lunch (a sandwich, soup in a thermos, milk in another thermos, and ice cubes in a third thermos). The sound of crunching ice cubes was background music in our lives.

The freezer is above the fridge and Steph was in a wheelchair, so after she was disabled, making ice cubes became my responsibility. There were always several small plastic tubs full of ice cubes, and on request I'd deliver ice.

It's one of a thousand silly things, but after Stephanie died, I couldn't bring myself to empty the last little plastic tub of ice cubes. It's been in the freezer for 3½ years now, and instead of being ice cubes it's clumped into one fist-sized chunk of ice, sort of crystalized and icky-looking. 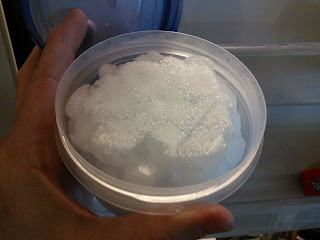 I can't possibly dump this clump of ice into the sink and let it melt, though. No frickin' way. When I leave, the ice will still be in its little tub in the freezer.

When walking got difficult for Stephanie, we bought her a wheelchair, and learned that the door to our tiny, cramped bathroom wasn't wide enough. It's an inch too narrow for Stephanie's wheelchair, so I took the door off its hinges, to get that inch back.

With the door gone, Steph could wheel herself to the toilet and shower. For a modicum of privacy, we hung a curtain where the door had been, and for the past eight years or so, our bathroom has had no door.

Most people, though, probably want a door on their bathroom, so as a favor to the next tenant, today I brought the bathroom door back down the hall, and with six screws, hung it in the doorjamb again.

The curtain, though — Steph picked it out. It's a dainty white thing with flowers embroidered in it, and it's coming to Seattle. With luck, it'll fit in a window, wherever I find an apartment. If not, I'll tack it up on the wall, as part of the new Stephanie Shrine.