Going through life in America, you become accustomed to being treated as a customer — expecting a certain baseline, small amount of respect and politeness. Not the white glove treatment or the Ritz-Carlton, nothing fancy like that, just such low-level niceties as "please" and "may I help you?" and a general vibe that says, "thank you, please come again."

"Call it the McDonald's standard," Steph once said. "Interactions with doctors, nurses, and medical technicians should be at least as respectful as the kid selling me a hamburger for lunch." And usually they were — but often they weren't, especially at the kidney clinic. 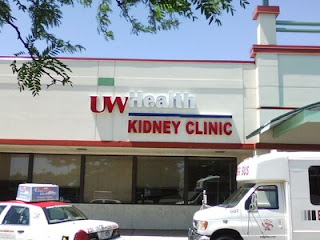 The UW Health Kidney Clinic is in a strip mall in Fitchburg, a suburb just south of Madison. If you're on dialysis and on Stephanie's health plan, that's where you go for treatment, blood tests, and all your kidney-related appointments. It looks like any other medical clinic, except that all the patients have been diagnosed with an incurable disease. Nobody gets good news at the kidney clinic. You try to stay chipper and upbeat, but it's unavoidably a somber place.

There's no sugar-coating the awfulness of dialysis, so it was always remarkable to me that Steph maintained such a positive attitude. I don't think she ever entered the kidney clinic in a bad mood, but many times she was cranky by the time she left the building. Many disgusting and disturbing things happened at the kidney clinic. So many, it's not feasible to list them all in a single entry, so this will be part one of a multi-part series.

Steph was a well-organized woman, and when she got sick she (of course) developed a reliable, workable system to track her many medications and medical appointments. She was required to be at the kidney clinic at least three times per month while she was on home dialysis, and later three times per week while she was on hemodialysis, and she was never a no-show. In five years of dealing with the kidney clinic, she called to cancel appointments twice, I think, maybe three times, and only when she was feeling so poorly that she if she'd kept the appointment she undoubtedly would've barfed or been incontinent.

The first time it happened, Steph blamed herself. "Guess I wrote the date down wrong," she said, bewildered and apologetic. But Stephanie always had a very scrupulous attention to detail, and her appointments were important to her, so the idea that she'd gotten the date wrong seemed weird to both of us.

And then, a few weeks later, it happened again. Steph had taken the afternoon off from work, collected her notes on the questions she wanted to ask, and we'd driven to the clinic in Fitchburg, but again we were told that Stephanie wasn't scheduled for an appointment that day.

This was circa 2014, well into the computer era, and the schedule was computerized at every other medical office we visited, but not at the kidney clinic. Although it's part of the sprawling and otherwise high-tech and fully-computerized University of Wisconsin medical system, appointments at the kidney clinic were still booked on paper, in a ledger-sized book at the front desk. There were no automated reminders, and there was no logging into MyChart from home, to doublecheck scheduled appointments.

Usually, there was no issue — we checked in at the front desk, and waited in the lobby until Steph's name was called, same as any medical appointment you've had anywhere. But once in a while, we'd walk in and they simply weren't expecting Stephanie at all. Steph would pull the appointment card out of her wallet, and the card said we were supposed to be there, but Steph's name wasn't on the schedule.

We began phoning in advance of every appointment, to doublecheck that the appointment existed — and if we include the times we straightened things out over the phone, the tally of forgotten appointments goes up from six to about ten.

Have you ever had an appointment forgotten by the staff, even once, at any doctor's office anywhere? Neither had we, but at the kidney clinic it happened so often we joked about it while driving to the clinic. "Hope we'll have an appointment waiting for us." When it happens once, you shrug it off. When it happens twice, and then again and again, you start to question the clinic's general competence.

Of course, every time an appointment was forgotten, everyone at the clinic was very apologetic, and Steph and I never tried to make it into a big deal. Usually they were able to squeeze her into the schedule, between other appointments, after she'd waited a long time in the lobby. They continued occasionally forgetting Stephanie's appointments, right up until about 2016, when the kidney clinic was finally connected to the computerized scheduling system every other facility used.

Maybe all of this doesn't sound like much in the scale of modern-day frustrations, and you know what? I think Steph would agree — having ten phantom appointments was by far the least of her complaints about the kidney clinic.

Usually visiting that place was just tedious, but sometimes the kidney clinic was awful, sometimes infuriating, and sometimes downright dangerous. I've hesitated to write about it, not sure I could fully convey the fear and frustration Stephanie felt. If I describe every awful thing that happened there, accurately and honestly, some of it will sound frankly unbelievable, Kafkaesque, or like dialogue from One Flew Over the Cuckoo's Nest. But I owe it to Steph to tell the truth, so I will swear, every word of it is true. Brace yourself.